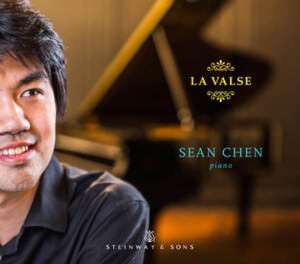 At the end of last year, I wrote at some length about a Warner Classics album of pianist HJ Lim on which compositions by Maurice Ravel and Alexander Scriabin were juxtaposed. Exactly a week ago the Steinway & Sons label released a similar album combining works by these two composers, this time performed by the young American pianist Sean Chen, whose academic credentials include Bachelor’s and Master’s degrees from Juilliard and an Artist Diploma from the Yale School of Music. Chen’s recording has a title, La Valse; and it seems to have been recorded right around the time Lim’s album was released in September of last year. The booklet notes by Damian Fowler give no indication of whether Chen was aware of Lim’s activities when he prepared the program for his own recording.

What are we to make of these two parallel efforts? One possibility is that we now have a new generation of performers who are far more imaginative than their predecessors in preparing programs. They are willing to take chances in juxtaposing compositions that, on the surface, seem thoroughly incompatible. These are risky exercises; but, when they “work,” they can be delightfully stimulating to the attentive listener. To chose an even more provocative example, when the Russian violinist Alina Ibragimova came to San Francisco (my home town) in February, the “spinal cord” for her program consisted of two Mozart sonatas (K. 301 in G major and K. 304 in E minor, both only two movements long) and Ludwig van Beethoven’s Opus 47 (“Kreutzer”) sonata in A major. However, between the two Mozart sonatas she performed John Cage’s “Six Melodies for Violin and Keyboard;” and Mozart and Beethoven were separated by Anton Webern’s Opus 7 set of four pieces. This created a situation in which Cage influenced how we were listening to Mozart, while the Webern selection inserted a “Second Viennese School” voice between two of the “First Viennese School” composers. There result turned out to be as stimulating and engaging as it was provocative.