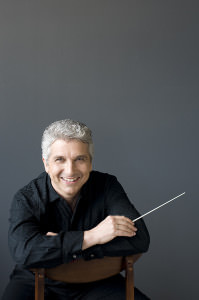 The evening will open with the Overture from Rossini's one-act opera La Scala di Seta. Next, Malette-Chénier will join the Philharmonia to perform the virtuosic Harp Concerto by R. Murray Schafer. One of Canada's foremost composers, Schafer is also an educator, environmentalist, scholar, and visual artist; he composed this concerto in 1987. Harp soloist Malette-Chénier is a winner of the 2013 Woolsey Concerto Competition.

The Philharmonia will conclude the concert with Ravel’s Daphnis et Chloé Suites No. 1 and 2. Ravel described the music as a “symphonie choréographique,” or a choreographic symphony. The piece, full of lush harmonies and elegant orchestration, is considered one of Ravel's most significant compositions. 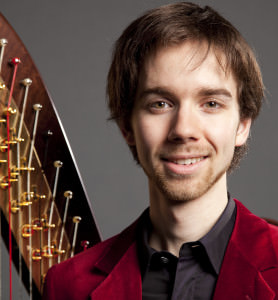 Toronto-born conductor Peter Oundjian, noted for his probing musicality, collaborative spirit, and engaging personality, has been an instrumental figure in the rebirth of the Toronto Symphony Orchestra since his appointment as Music Director in 2004. In his tenure with the TSO, Mr. Oundjian has also released four recordings on the orchestra’s self-produced record label, tsoLIVE. The award-winning documentary Five Days In September: The Rebirth of An Orchestra, is available on DVD and chronicles Peter Oundjian’s first week as Music Director of the Toronto Symphony Orchestra. In addition to his post in Toronto, Peter Oundjian has served as Principal Guest Conductor of the Detroit Symphony Orchestra (2006–2010) and played a major role at the Caramoor Festival 1997–2007. He has served as a visiting professor at the Yale School of Music since 1981. In May 2009, Mr. Oundjian received an honourary doctorate from the San Francisco Conservatory. Peter Oundjian was educated in England, where he studied the violin with Manoug Parikian. He then attended the Royal College of Music in London, where he was awarded the Gold Medal for Most Distinguished Student and Stoutzker Prize for excellence in violin playing. He completed his violin training at the Juilliard School in New York, where he studied with Ivan Galamian, Itzhak Perlman, and Dorothy DeLay. Peter Oundjian was the first violinist of the renowned Tokyo String Quartet for fourteen years.

Born in Gatineau, Canada, Antoine Malette-Chénier has studied with harpist Caroline Léonardelli, and with Caroline Lizotte at the Conservatoire de musique de Trois-Rivières and the University of Montréal. He is currently pursuing his master’s degree at the Yale School of Music, where he studies with June Han. Antoine's many awards include three ﬁrst places at the Canadian Music Competition (2004, 2009, 2011), two bursaries from the National Arts Centre Orchestra, and ﬁrst prize in two concerto competitions where he was awarded soloist tours with orchestras in Canada and Hungary. He was a guest artist for the 2007 Ottawa International Chamber Music Festival and recorded for Radio-Canada the same year as a winner of the Young Artists Competition. In 2011, Antoine was a “Focus on Youth” artist at the 11th World Harp Congress in Vancouver, Canada. The following year, he received the prize for the best interpretation of a work at the prestigious Prix d’Europe competition in Montréal. In 2013, he won the Yale School of Music’s Woolsey Concerto Competition, and received an Award of Excellence from the National Youth Orchestra of Canada. Antoine is also an active orchestral musician, having played for the Orchestre de la francophonie, Ottawa Symphony Orchestra, and Nouvel Ensemble Moderne, among others.