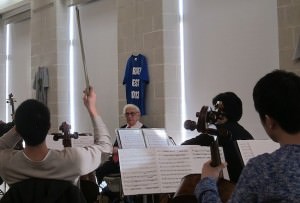 “Nonononono.” Aldo Parisot said with a sudden lowering of his hands, bringing a panoply of bows, all fiercely swinging to Antonio Vivaldi’s “Concerto No. 4 in F minor” (“Winter”) from The Four Seasons, to an abrupt halt.

“Somebody screwed it up. Was it you?”

A single finger pointed to the chest of a young cellist, who seemed to tighten his grip around the bow as he nodded solemnly.

There is much to know about Parisot, the founder and director of the Grammy-nominated, internationally recognized Yale Cellos. Two facts stand out this time of year.

First: he is tough. “I want perfection,” he said at the end of a rehearsal. “That does not exist, but that doesn’t stop me.”

Second? He believes fiercely in his students, perhaps more than they believe in themselves.

“It’s wonderful working with them. They are my students, you know. We have a great deal of fun.” he said with just a hint of mischief a few days before the concert, sitting in a practice space at Yale’s Slifka Center.