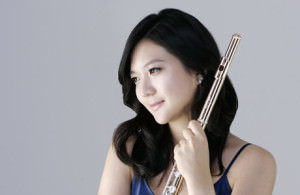 A Korean flutist will join the New York Philharmonic Orchestra for the first time in the orchestra's 170-year history, according to the Kumho Asiana Foundation Friday.

Son Yoo-bin, 28, was appointed as a second flute of the New York Philharmonic last Tuesday after auditions.

She becomes the first Korean in the woodwind section of the prestigious ensemble.

Michelle Kim, an assistant concertmaster, and some other Koreans such as Oh Joo-young and Ham Hae-young in the violin section are also part of the orchestra.

Son will participate in rehearsals from Nov. 27, and will make her debut at the Lincoln Center on Nov. 29. She will be in Korea with the orchestra during its Seoul tour in 2014.

Son left for the U.S. when she was 14 after studying with Park Eui-kyung at the Yewon School. She earned her bachelor's degree at the Curtis Institute of Music studying with renowned teacher Jeffrey Khaner.

She attained a master's degree at the Yale School of Music studying under Ransom Wilson. FULL ARTICLE