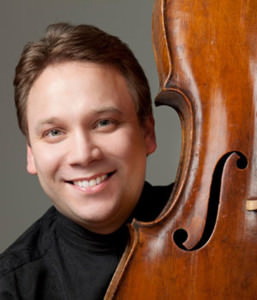 Cellist Dmitri Atapine '10DMA was appointed to the prestigious CMS Two program at Lincoln Center, it was announced April 23. Atapine was one of eight new young artists-in-residence selected by the Chamber Music Society of Lincoln Center to join the CMS Two roster for the 2015–16 season.

The CMS Two program is a three-year residency offers the finest young musicians the opportunity to participate in every facet of Lincoln Center's activity, including the New York concert season in Alice Tully Hall, the Rose Studio, and the Kaplan Penthouse. In addition, the performers take part in national and international residencies, tours, radio broadcasts, and recording. The artists are given billing alongside the seasoned colleagues on the intergenerational, critically acclaimed roster curated by CMS artistic directors David Finckel and Wu Han. Atapine and the other seven winners were selected from an international pool of 237 applicants, of which 41 performed live as part of the audition process.

Russian-born cellist Dmitri Atapine, 33, has appeared in such distinguished venues as Alice Tully Hall, Zankel and Weill halls at Carnegie Hall, Sapporo Kitara Hall, and the National Auditorium of Spain. An avid chamber musician, he has previously performed with CMS, and at multiple festivals including Music@Menlo, La Musica Sarasota, Aldeburgh, Aix-en-Provence, Cactus Pear, and Nevada. His performances have been broadcast on radio and television in the United States, Spain, Italy, Canada, Mexico, and South Korea. His awards include the first prize at the Carlos Prieto Cello Competition, as well as top honors at the Premio Vittorio Gui, Plowman, and New England chamber competitions. He has collaborated with the Tokyo and St. Lawrence string quartets, and such distinguished musicians as Ani Kavafian, Ida Kavafian, Paul Neubauer, Wu Han, Bruno Giuranna, and David Shifrin.

Mr. Atapine holds a doctorate from the Yale School of Music, where he was a student of Aldo Parisot. The artistic director of the Argenta Concert Series and Ribadesella Festival, Mr. Atapine is the cello professor at the University of Nevada, Reno.