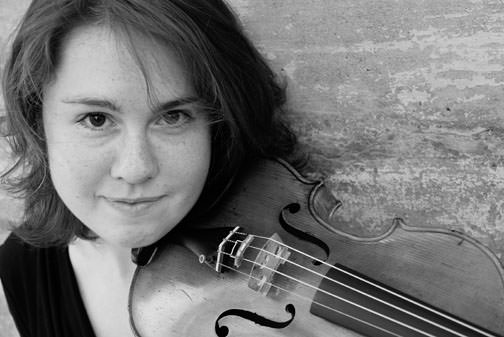 Last week, Caroline Shaw found herself playing a benefit concert at the Hudson Opera House, a performing arts space a few hours north of New York, where she lives. She was playing second violin in a string quartet that was performing music by David Longstreth, of the band Dirty Projectors. It was sort of a quirky gig, one that took a lot of time to prepare and didn’t pay much.

It was not, perhaps, the first place you’d expect to find a much-feted musician who last year, at 30, became the youngest composer ever to win the Pulitzer Prize for music, for her eight-voice composition “Partita.” But Shaw, who describes herself as a low-key, private person, has been determined not to let the music world’s highest-profile award change her life. Playing the Hudson show was a part of that plan.

“I did it because I wanted to play quartets with friends, meet a new person, see a new place, just figure out another corner of the music world,” said Shaw in a recent phone interview. “No one knew that I’d won a Pulitzer Prize; I was just the second violinist in this quartet at this gala benefit.”

Not long before the Pulitzer thrust Shaw into the spotlight, she was asked by the Boston chamber orchestra A Far Cry to write a new piece, a collaboration with Roomful of Teeth, the inventive vocal ensemble of which Shaw is a founding member. The new work, “Music in Common Time,” will be premiered at two concerts this weekend. The program will also include Shaw’s arrangement of a brief piece by Josquin des Prez and a string orchestra version of Schubert’s “Death and the Maiden” Quartet.

Amazingly, the new piece is the first formal commission Shaw has received; equally surprising, perhaps, is the fact that she never had any formal training in composition until 2010, when she enrolled in a doctoral program in composition at Princeton University. Her career — it almost seems odd to call it that — is one in which the roles of violinist, singer, and composer are melded seamlessly, and steps forward seem matters of serendipity rather than part of an overarching plan.

Playing the violin dominated Shaw’s musical life through her undergraduate years at Rice University and a master’s degree at Yale. It was at Yale that she got to know Miki-Sophia Cloud, now a violinist in A Far Cry. “I remember being struck by Caroline’s rare and genuine artistic soul,” Cloud wrote in an e-mail. “She was always drawing, improvising, playing, or designing something. Everything about her was unique, radiant, and full of curiosity in a completely natural and unpretentious way.”

Cloud wasn’t even aware that her fellow violinist wrote music until Shaw’s master’s recital, which included one of her own works. “I remember sitting in the balcony of the recital hall, a pile of waterworks, because the piece was such a direct translation of that artistic soul I so admired. I was floored.”

It was at Yale that Shaw began singing, even though she never thought of herself as having a great voice. But “I could read music and sing all the right notes at the right time,” she said. “And over time I literally found my voice, found a way to make sound.”

In 2008 she heard about a small group that conductor and singer Brad Wells was putting together dedicated to expanding vocal repertoire. That became Roomful of Teeth, a gloriously unclassifiable a cappella ensemble that uses all sorts of unusual singing techniques. Shaw remembered harboring doubts before their first rehearsal, in 2009. “And that first day there was something about the energy with the eight of us, we decided collectively we’re going to be very open. And we were working with a throat singer who had just flown in from Tuva [the Russian state] and this master yodeler. And that was a great place to start, just start making strange noises in front of each other.”