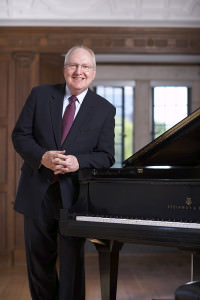 At the University of South Carolina's Commencement ceremonies this past weekend, YSM Dean Robert Blocker was awarded an honorary Doctor of Music degree. Blocker is a native of South Carolina. At the same ceremony, Sir John Meurig Thomas, a renowned chemist, educator, author and inventor, received an honorary Doctor of Science degree. The speaker was W. James McNerney Jr., a Yale alumnus who is chairman, president, and CEO of the Boeing Company. The president of the University of South Carolina is Harris Pastides '77MPH, '80PhD; he and his wife, Patricia Moore Pastides '79MPH, are also Yale alumni. About Robert Blocker Robert Blocker, now serving his fourth term as the Henry and Lucy Moses Dean of Music at Yale University, is acknowledged as one of the nation’s leading arts administrators. He holds appointments of Professor of Piano and a joint appointment as an Adjunct Professor with Yale University’s School of Management. Following baccalaureate studies at Furman University (BA, 1968), Mr. Blocker earned graduate degrees (MM, 1970; DMA, 1972) at the University of North Texas. He was a fellow at the Institute for Educational Management at Harvard in 1986 and is the recipient of three honorary degrees. In 2006, Mr. Blocker was named honorary Professor of Piano at the Central Conservatory of Music in Beijing. His many contributions to the music community include service on the advisory boards for the Avery Fisher Artist program and the Stoeger Prize at Lincoln Center, the Van Cliburn Foundation, the Gilmore Artist Advisory Board, and the Curatorium of the Liszt Ferenc Academy of Music. He was featured in the Steinway & Sons 2000 film commemorating the tercentennial year of the piano. He appears regularly on national radio and television as an artist and commentator and is active as a consultant to major educational institutions and government agencies. Under his leadership, the Yale School of Music endowment has grown from $29 million to $365 million, including a transformative gift of $100 million. During Mr. Blocker’s tenure as dean, there have been unprecedented renovations on the School of Music’s campus, including the enhancement of the Center for Study of Music Technology that permits students, faculty, and administration to communicate, via real-time broadcasting with institutions around the world. Other notable renovations include Sprague Memorial Hall and Leigh Hall. With the completion of the Hendrie Hall renovation all Yale School of Music facilities will be state of the art facilities. Robert Blocker is highly regarded internationally for his artistry as a concert pianist. Recent orchestral engagements include the Beijing Symphony Orchestra, Shanghai Symphony, Monterey Philharmonic, Houston Symphony, and the Prague and Moscow Chamber Orchestras. In 2009, Naxos released a CD of three Mozart concerti performed by Mr. Blocker with the Biava Quartet.