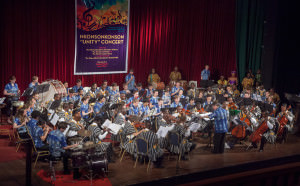 Tonight, the Yale Club of Ghana and the Association of Yale Alumni presented a Nkonsonkonson “Unity” Concert at the National Theatre in Accra. The concert, which was a benefit for the Ghana-Yale Partnership for Global Health, brought together the National Symphony Orchestra of Ghana, the Yale Concert Band, and the Yale Percussion Group.

After the Yale Concert Band (YCB) opened with Rossini’s William Tell Overture, the event featured welcome remarks from Dr. Elijah Paintsil, a member of the Yale School of Medicine faculty and a co-founder of the Ghana-Yale Partnership for Global Health; Nachilala Nkombo, Deputy Director of the ONE Campaign, Africa; a representative from IBM, a partner in the medical initiative; and a representative from the Office of the President of Ghana. 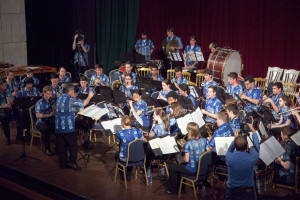 The first half of the concert featured the YCB and Yale Percussion Group (YPG), including band pieces by Morten Lauridsen, Leonard Bernstein, and John Philip Sousa. A movement of a concert by Duffy featured the YPG on marimba. Two members of the YPG—Mari Yoshinaga and Garrett Arney—played the duet Seeds, by Leonardo Gorosito and Rafael Alberto, and the full six-member ensemble played Steve Reich’s Music for Pieces of Wood. 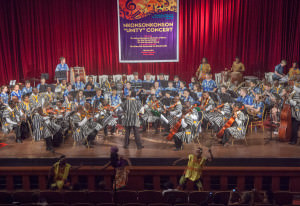 The NSO Ghana opened the second half with two pieces, both featuring African dancers. The full ensemble joined together to play Jeff Tyzik’s Riffs to close the concert. The finale, which featured Jonny Allen on drum set as well as the Ghanaian percussionists, brought the audience to its feet.

The Ghana-Yale Partnership for Global Health is working to eliminate mother-to-child transmission of HIV in Ghana. Together with the Ghana Health Service, the initiative is an unprecedented public-private partnership. Ghana aims to become the first country in sub-Saharan Africa to eliminate pediatric HIV.

In 1959, the Yale Concert Band became the first university band to tour internationally. In 1999, when the ensemble crossed the Strait of Gibraltar to perform in Ceuta, it became the first Yale ensemble to perform in Africa. The Band performed in South Africa and Swaziland in 2011. A message in tonight’s concert program noted: “Now the Band is delighted to appear in and perform with the musicians of Ghana, a country whose drumming masters and tradtions are legendary and well respected. The history of American jazz begins with the sounds of West Africa, and we are so fortunate to be here to hear them, and play them, and live them.”