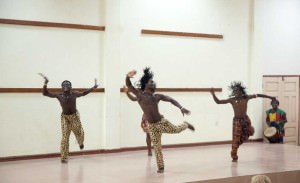 On Monday, May 26, the Yale ensembles currently in Ghana visited the University of Cape Coast (UCC). A drumming ensemble from UCC welcomed the group for an afternoon music exchange. Dancers then joined the ensemble for an exciting performance.

The Yale Percussion Group, made up of the School of Music's six graduate students in percussion, played Steve Reich's Drumming. (Reich himself  had been inspired by a trip to Ghana.) Drumming combines patterns influenced by West African music with Reich's concept of phasing, in which performers deliberately move out of sync with one another. 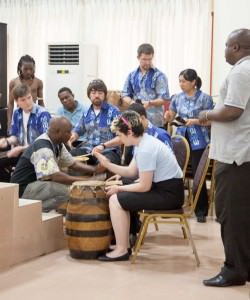 The Yale and UCC groups enjoyed dinner together outside at the university before returning to the concert hall for the evening's performance.

Again, the event opened with drumming and dancing. Then the Yale Concert Band took the stage, with Thomas C. Duffy directing the ensemble in classic band repertoire as well as contemporary pieces for an appreciative crowd.

The YPG took the stage to play Thierry de Mey's Table Music, a piece for three percussionists using only their hands on a tabletop. They then played another piece by Steve Reich, Music for Pieces of Wood. The piece shows the multiple possibilities that lie in repeating patterns played with mallets on six pieces of wood.

The concert's finale, Jeff Tyzik's "Riffs," features extended solos on a drum set, played by Jonny Allen '14MM. Thomas Duffy invited the UCC drummers to join in, and the result thrilled the audience.

"Don't think that was rehearsed." Duffy said to the cheering crowd afterward. "No. It wasn't. This shows that music is a universal language."

This musical exchange will continue: the percussionists from UCC are interested in getting access to the scores for the Western percussion pieces. The members of the YPG will continue to study and record Ghanaian drumming patterns throughout this week. 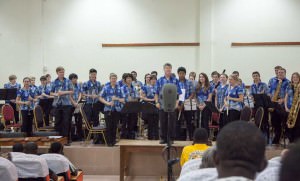 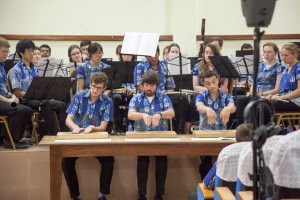 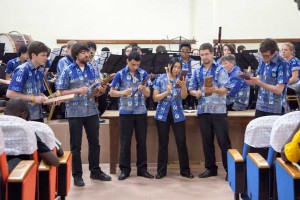 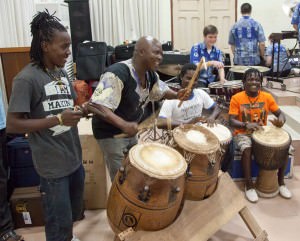