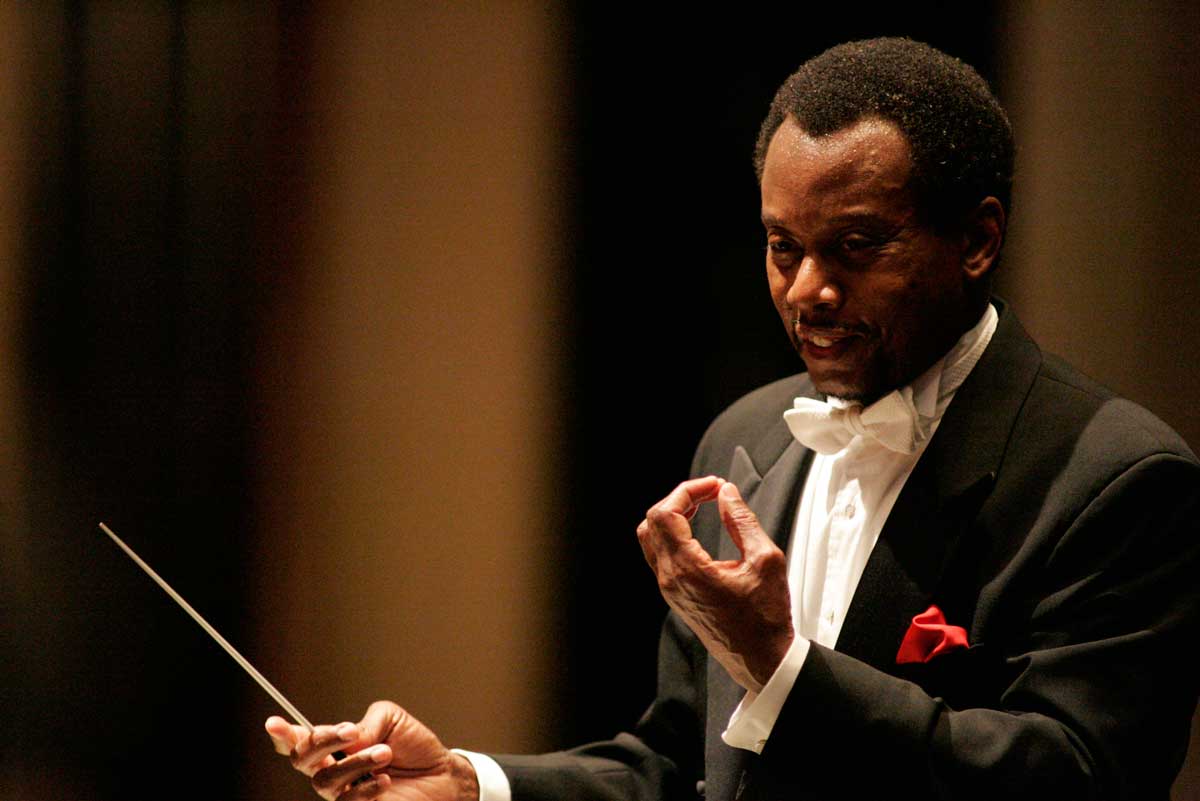 In a press release, the Kalamazoo Symphony Orchestra announced a four-year contract renewal with music director Raymond Harvey '78 MMA, '94 DMA, a graduate of the Yale School of Music. Harvey, who just completed his 15th season with the KSO, has signed on to continue leading Michigan's third-largest symphony through May 31, 2018.

"I've enjoyed 15 seasons as Music Director of the Kalamazoo Symphony Orchestra," the release quoted Harvey as saying, "and I'm thrilled to accept a four-year renewal of my contract. I'm proud of this orchestra and its artistic growth over these years. But of equal importance is the impact we've made on so many different segments of the Kalamazoo community. It's an honor for me to help shape the music that speaks to so many hearts."

Harvey's contract renewal follows two other recent top appointments at the KSO. Earlier this spring, Susie Park was named KSO concertmaster, and in March, the KSO announced the appointment of Peter H. Gistelinck as executive director. Gistelinck arrives in Kalamazoo on May 19. "As the incoming Executive Director, I am extremely pleased about the contract renewal of Music Director Raymond Harvey", says Gistelinck. "It is clear that Maestro Harvey has had an amazing and long-term artistic impact on the Kalamazoo community, not at the least because of his out-of-the-box programming and innovative concerts. Needless to say I am very thrilled and looking forward working closely with him over the many concert seasons to come."

Over the past 35 years, Raymond Harvey has made a significant impact as an American conductor of great skill and insight. Born in New York City, he studied piano and conducting, receiving Bachelors' and Master's degrees in choral conducting from Oberlin Conservatory of Music; and then studied orchestral conducting at the Yale School of Music, earning a Master's and Doctor of Musical Arts degrees.

The upcoming 2014–2015 concert season will mark Maestro Harvey's 16th anniversary as music director of the Kalamazoo Symphony Orchestra. He previously held the top post at the Fresno Philharmonic (California), Springfield Symphony (Massachusetts), and El Paso Opera (Texas). His opera repertoire is extensive, including Carmen, Otello, Tosca, Madama Butterfly, La Bohème, Turandot, Aida, La Traviata, The Tales of Hoffmann, and The Marriage of Figaro, to list only a few.

Maestro Harvey has appeared as guest conductor with many of America's leading orchestras, including those of Philadelphia, Atlanta, St. Louis, Indianapolis, Buffalo, Detroit, New Orleans, and Minnesota, as well as the New York Philharmonic's Young People's Concerts and the Boston Pops. He has also had engagements with the Maggio Musicale Orchestra of Florence, Italy, the Pusan Symphony of South Korea, and the National Symphony Orchestra of Costa Rica. In recent years he has led the Boise Philharmonic, the University of Michigan Orchestra, the National High School Honors Orchestra, and All-State Orchestras in California and Texas. He regularly performs as a pianist, both in chamber music and as a pianist/conductor in works of Gershwin, Mozart, and Rachmaninoff.

Highly regarded as a teacher, Raymond Harvey devotes part of every summer to the Conductors Institute at Bard College, New York. This past year, he also served as an adjunct faculty conductor with the University of Houston's opera department.

The Kalamazoo Symphony Orchestra, founded in 1921, is Southwest Michigan's premier musical organization, providing musical enrichment to over 80,000 adults and youth per year. The third-largest professional orchestra in the state, the KSO has won numerous awards and grants, including the Met Life Award for Arts Access in Underserved Communities, the National Endowment for the Arts for its extensive education programs, and a major Ford Foundation grant to found its innovative Artist-in-Residence program.