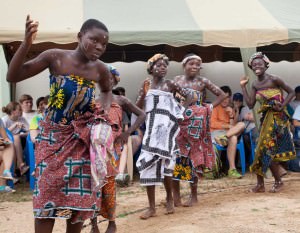 ACCRA, GHANA — In Ghana, traditional drumming continues to play an important role in public and private life – despite the modernization taking place all over West Africa.

When newlyweds leave wedding chapels, or when the president calls on parliament, or when foreign dignitaries arrive at high-profile conferences, drummers are often there to pound out a welcoming beat.

In fishing and farming villages, traditional drumming and dancing is still part of the send-off that men get to war, or in the welcoming of newborn babies.

So when Yale University’s percussion group headed to visit towns and villages on Ghana’s central coast last month, they came not just to drum, but to document.

Armed with cameras and sound recorders, the students set out to collect and transcribe the West African nation’s traditional drumming, and share it with the villagers so that it can be preserved in written form for generations to come.

“It is a cultural event as well as a musicological event. If we can find the right place to post this then the world can take a look at it,” says Thomas C. Duffy, music director for the Yale concert band, whose members were part of the trip. “Whatever we do we’re going to return it [for] their discussion and further collaboration.”

The drumbeat documentation was part of a trip where the music students also performed with the national symphony before heading to the countryside.

The students visited towns and villages in Ghana’s central region, documenting drumming and dancing that had been passed down through the years and also performing alongside the Ghanaian drummers.

But when Mr. Duffy and his students arrived and asked the villagers to play them their traditional music, there was, in some cases, disagreement over how best to play, so long had the songs or syncopation lain dormant.

Others times, villagers would confide to the assembled students that they were hearing songs they hadn’t heard since they were children.