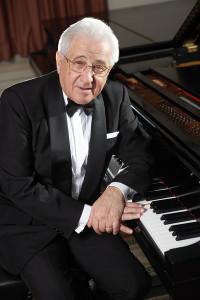 PYEONGCHANG, Gangwon Province ― On a sunny Sunday afternoon, students carrying their own instruments crisscrossed through dozens of buildings at the snowless ski resort of Alpensia, rushing to lessons, master classes or makeshift practice rooms.

Some of them were heading to the resort’s convention center, where renowned pianist Peter Frankl was scheduled for a master class.

During the master class, which was open to the public, three students had a chance to perform in front of the maestro and a small audience consisting mostly of their fellow students and parents.

Park Ji-eun from Cleveland Institute of Music was the first to take the stage, playing Schumann’s “Carnaval,” Op. 9. As soon as she finished the seven-minute piece, the 72-year-old virtuoso started making suggestions, sometimes demonstrating on the piano.

“Because of the ‘forte’ resonance, it’s better to stop here before (starting) ‘pianissimo,’” Frankl instructed, as Park went through the piece once again.

As the player reached the section with a waltz motif, he said: “Imagine here that a couple is dancing. And here, see these small notes? Imagine that the couple is saying something to each other ... like ‘I love you very much.’” The entire audience burst into laughter.

The maestro spoke gently but with authority, at one point telling the student to repeat the same part again and again until she got it right.

The session lasted for nearly 40 minutes. Then the process was repeated with two other students. Ashley Kaeun Hoe of the University of South California played Mendelssohn’s “Variations serieuses,” Op. 54, while Kim Tae-yong of the Juilliard School presented “Valses nobles et sentimentales” by Ravel.

For the three and others in the audience, every minute with the pianist must have been precious. Their gray-haired teacher is, in fact, an accomplished pianist with an illustrious career of more than five decades. He also boasts a number of recordings, including the complete works for piano by Schumann.