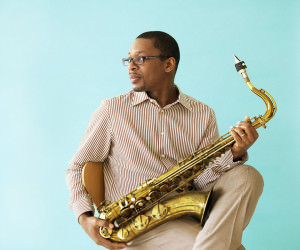 NOTE: This post was updated 8/28/2014 to reflect changes in personnel.

The Yale School of Music presents the post-bop saxophonist Ravi Coltrane and his quartet on Friday, September 12, 2014 at 7:30 pm.

The son of the legendary John Coltrane, Ravi Coltrane has been praised for his “style informed by tradition but not encumbered by it” (Philadelphia City Paper). NPR notes that Coltrane takes a “sleek and modern approach, loosely suggesting his father's adventurous spirit but not his signature sound.”

Praised for his music’s “elusive beauty” (DownBeat) and for his “style informed by tradition but not encumbered by it” (Philadelphia City Paper), saxophonist Ravi Coltrane takes a bold step in his creative journey with Spirit Fiction, his Blue Note Records debut.

Born on Long Island in 1965, Ravi is the second son of John and Alice Coltrane. His father (who recorded the landmark Blue Train for Blue Note in 1957) died when Ravi was only two. Alice, a renowned composer and pianist, raised Ravi on the West Coast and proved a strong role model in her own right. Ravi had the honor of producing and playing on Alice Coltrane’s Translinear Light, released three years prior to her death in 2007.

A move back east to New York and pivotal stints with Elvin Jones, Wallace Roney and Steve Coleman led Ravi to begin asserting himself as a leader in the mid 1990's. He followed Moving Pictures and From the Round Box with Mad 6, In Flux, and Blending Times. He also continued appearing as a sideman with the likes of McCoy Tyner, Jack DeJohnette, Jeff 'Tain' Watts, and Flying Lotus (a.k.a. Steven Ellison, Ravi's cousin) , and as a co-leader of the Saxophone Summit with Lovano and Dave Liebman.