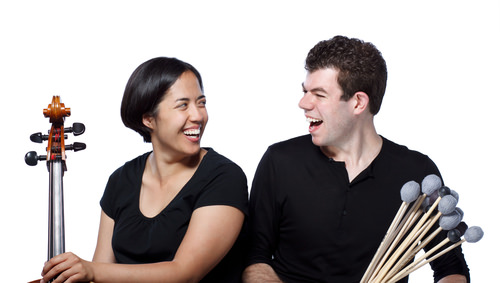 The cello/percussion duo New Morse Code has been awarded a 2014 Classical Commissioning Grant from Chamber Music America. The duo — made up of percussionist Michael Compitello ’09MM, ’12MMA and cellist Hannah Collins ’08MM, ’09AD — will work with composer Christopher Stark on a new piece for cello, percussion, and electronics.

The grant will support the creation of this new piece, which will be premiered in the 2015–2016 season. Called The Language of Landscapes, Stark's composition will leverage the unique sonic terrain of cello and percussion—transforming real and imagined landscapes into compelling musical spaces.

The journey created in the piece will begin with Michael’s Southwest desert home, traveling through the deciduous hills of upstate New York (Hannah’s home) and finally towards the wide sky of Christopher’s northern Rockies.

New Morse Code will spend the next year developing the piece with Stark, generating and refining musical material in a series of residencies, gathering field-recordings and objects from the representative regions, and developing a set of custom-built live electronics.

The groups chosen in each of Chamber Music America’s highly selective programs were named through independent peer panels of prominent musicians and composers. Fifteen grants totaling $210,000 have been awarded through the Classical Commissioning program, which provides support for U.S.-based professional classical and world music ensembles and presenters for the creation and performance of new chamber works by American composers.