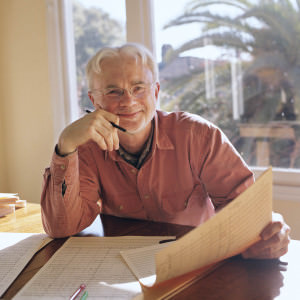 Renowned American composer and conductor John Adams will return to the university in his multiple roles as composer, conductor, and thinker during a weeklong residency Oct. 12–19. Events include a panel discussion and two concerts in which Adams will conduct the Yale Philharmonia and the Brentano String Quartet.

The panel discussion will include Peter Salovey, president of Yale, and Robert Blocker, dean of the Yale School of Music. It will take place 1–2:15 p.m. on Thursday, Oct. 16 in Morse Recital Hall (located in Sprague Hall at 470 College St). The event is free and open to the public.

The residency will culminate in two concerts featuring Adams conducting the Yale Philharmonia in his own music alongside works by Stravinsky and Beethoven. “There is nothing particularly new about one composer internalizing the music of another and ‘making it his own,’” noted Adams. “Composers are drawn to another’s music to the point where they want to live in it, and that can happen in a variety of fashions.”

The program will showcase Adams’ dual roles as conductor and composer with his Beethoven-inspired piece “Absolute Jest,” performed with Beethoven’s Symphony No. 4 and Stravinsky’s “Orpheus.” A concerto for string quartet and orchestra, “Absolute Jest” also features the Brentano String Quartet in its debut year as Yale’s quartet-in-residence.

Adams has described “Absolute Jest” as “the most extended experience in pure ‘invention’ that I’ve ever undertaken… a thrilling lesson in counterpoint, in thematic transformation and formal design.” 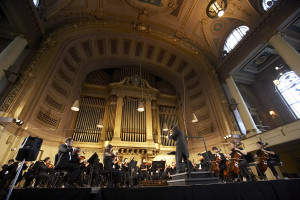 The first concert will take place at 7:30 p.m. on Friday, Oct. 17 in New Haven’s historic Woolsey Hall, corner of College and Grove streets. Tickets start at $10 ($5 with student ID) and are available online or through the Yale School of Music concert office, 203-432-4158. TICKETS

The program will be repeated at 5 p.m. on Sunday, Oct. 19 in Avery Fisher Hall at Lincoln Center. This concert marks the opening of the Yale School of Music’s eighth season of the Yale in New York concert series. General admission tickets are $30 ($15 for students with ID) are available online or by calling the box office at 212-721-6500. TICKETS

Adams’ residency at Yale will also include private workshops with School of Music graduate students. He will meet with student composers and will also coach students working on his compositions.

Yale awarded John Adams an honorary Doctor of Music degree in 2013. He presented Yale’s Tanner Lectures on Human Values in 2009.

For more information, please visit music.yale.edu or contact the Yale School of Music concert office at 203 432-4158.