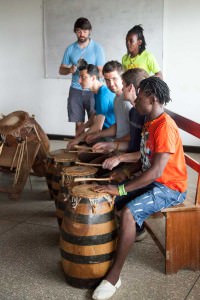 For decades, musical groups from Yale have flown all over the world in the summers to perform. But the 12-day trip that members of the undergraduate Yale Concert Band and the School of Music’s Yale Percussion Group took to Ghana in May wasn’t just for sharing their own music but also for learning about Ghana’s musical culture.

While on the trip, students made video and audio recordings to document native Ghanaian drummers and dancers—recordings that will be used to make and publish transcriptions in collaboration with scholars and publishers in Ghana. Yale Bands director Thomas Duffy, who led the trip, likens the research to the valuable folk-music field recordings that scholars made in Appalachian areas of the United States in the 1930s.

The students experienced “all levels of collaboration” with the Ghanaian musicians, Duffy says, including drum classes with a master teacher. These were complex rhythmic routines that took the Yale students days to learn—though in Ghana, Duffy marvels, “kids play this stuff.”

Yale Percussion Group member Douglas Perry ’14MusAD told Yale’s communications department in an interview that the experience taught him “the value of growing up in a culture that prioritizes music and dance. Not only was the sense of community and tradition very strong, but every person I met—man or woman, child or adult—could play drums and dance.”