The Yale Opera program at the Yale School of Music presents its annual Fall Opera Scenes on Saturday, November 1 at 7:30 pm and Sunday, November 2 at 2:00 pm. Each performance features a different selection of scenes from diverse operas.

A favorite of local audiences, the annual Fall Opera Scenes production will showcase the voice students of the highly selective Yale Opera program, which is directed by Doris Yarick-Cross. This autumn’s production will also feature the work of stage director Marc Verzatt and musical directors Douglas Dickson and Timothy Shaindlin.

END_OF_DOCUMENT_TOKEN_TO_BE_REPLACED

Raúl García ’09MM, ’10AD was recently appointed principal viola in the National Symphony Orchestra of Colombia. A native of Colombia, García currently serves on the viola faculties at Fundación Juan N. Corpas and Central University in Bogotá. He also performs regularly with the Macondo Chamber Players.

Garcia expressed his gratitude toward his teachers and mentors from the Yale School of Music. “I want to acknowledge Yale’s great viola professor, Ettore Causa. Once I heard Ettore’s sound it never left my soul and it keeps inspiring my viola playing beyond imagination.” He also wishes to recognize Syoko Aki, Dean Blocker, the Tokyo String Quartet and the late Jesse Levine.

One of the most active orchestras in Colombia, the National Symphony Orchestra of Colombia was founded in 2003, though it has operated under various other names since the 1950’s. The orchestra is located in Columbia’s capital city, Bogotá.

END_OF_DOCUMENT_TOKEN_TO_BE_REPLACED

San Francisco Conservatory of Music (SFCM) announced this week the names of the 17 young writers participating in the public and private events comprising the 2014 Rubin Institute for Music Criticism. Taking place in San Francisco and the San Francisco Bay Area November 5–10, 2014, the biennial Institute, now in its second season, is devoted to the advancement of classical music criticism and aims to be a positive force in the art of writing and talking about music, as well as a catalyst in sparking dialogue on the topic.

The fellows from the Yale School of Music are Jacob Ashworth, Fiona Last, Daniel Schlosberg, and Scarlett Tong Zuo.

Birgit Hottenrott, Executive Director of the Rubin Institute, welcomed the Rubin Fellows, saying: “It is with pleasure that I introduce the 2014 Rubin Institute Fellows. With various musical backgrounds encompassing studies in oboe, violin, guitar, cello, piano, composing, conducting, recording engineering, musicology, music history and singing, these young writers will bring an eagerness to both enhance their skills in the craft of writing music and to express their generation’s perspectives on the art of music criticism.” END_OF_DOCUMENT_TOKEN_TO_BE_REPLACED

NYT: For John Adams, a Day of Music, Not Protests 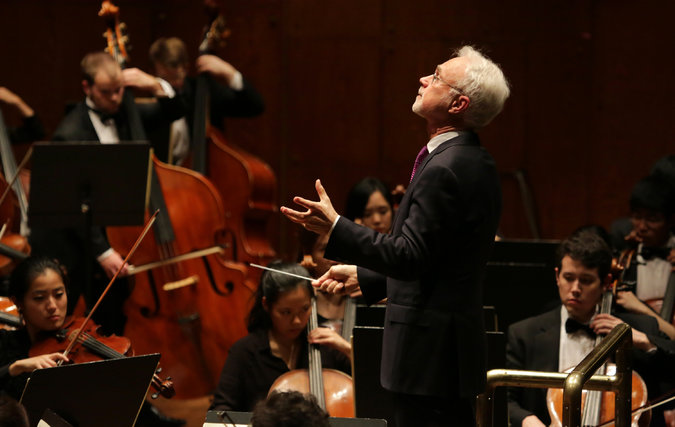 About 24 hours before protests organized by various Jewish groups against the Metropolitan Opera’s production of John Adams’s “The Death of Klinghoffer” were anticipated to start at Lincoln Center, Mr. Adams was at Avery Fisher Hall on Sunday afternoon, conducting the Philharmonia Orchestra of Yale in a terrific concert.

There were no protests or disruptions of any kind on Sunday.

With this performance, part of the Yale in New York series, Mr. Adams wound up a week’s residency at the Yale School of Music, where he worked with students and prepared this concert, a program of Stravinsky’s “Orpheus,” Beethoven’s Fourth Symphony and his own 2012 piece, “Absolute Jest.” END_OF_DOCUMENT_TOKEN_TO_BE_REPLACED