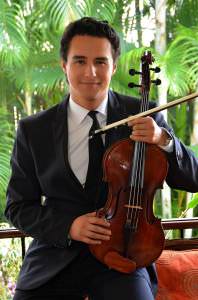 Raúl García '09MM, '10AD was recently appointed principal viola in the National Symphony Orchestra of Colombia. A native of Colombia, García currently serves on the viola faculties at Fundación Juan N. Corpas and Central University in Bogotá. He also performs regularly with the Macondo Chamber Players.

Garcia expressed his gratitude toward his teachers and mentors from the Yale School of Music. "I want to acknowledge Yale's great viola professor, Ettore Causa. Once I heard Ettore's sound it never left my soul and it keeps inspiring my viola playing beyond imagination." He also wishes to recognize Syoko Aki, Dean Blocker, the Tokyo String Quartet and the late Jesse Levine.

One of the most active orchestras in Colombia, the National Symphony Orchestra of Colombia was founded in 2003, though it has operated under various other names since the 1950's. The orchestra is located in Columbia's capital city, Bogotá.

Raúl García has been winner of numerous competitions in his native country, performing as soloist with major orchestras including Bogota Philharmonic Orchestra, VallePhilharmonic Orchestra, and the Colombian National Symphony Orchestra. He received prizes at the Second Colombian Viola Competition in 2000 and the Youth Symphony Orchestra of the America ’s Concerto Competition in San Juan, Puerto Rico . Raúl was awarded the Carolina Oramas Scholarship by ICETEX.

Mr. García holds a bachelor's degree from Juan N. Corpas University, and the Master of Music degree and Artist Diploma from the Yale School of Music.While a student at Yale, García won the Georgina Lucy Grosvenor Memorial Prize  for excellence in performance in 2010.

Raúl plays a contemporary viola made by Robert Brode.