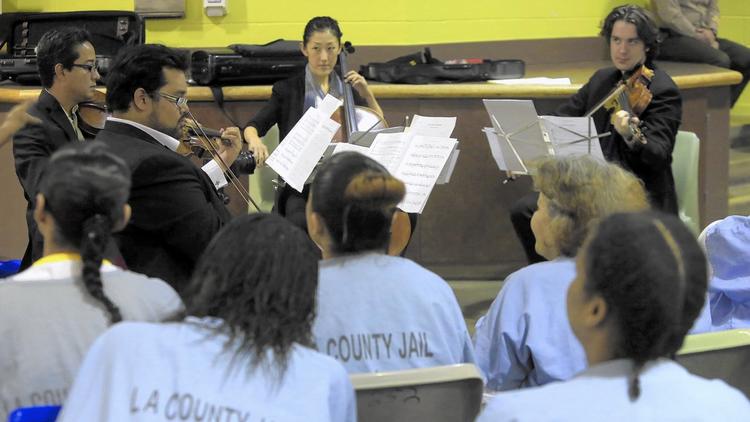 The first ovation did not take long. The moment the musicians entered the room Friday morning, the audience erupted.

The spectators were seated in five long rows, roughly 85 women altogether, all of them wearing the same outfit. Dark blue pants, white sneakers and light blue tops with black stenciling on the back.

Because they can't attend a concert at Disney Hall, L.A. Philharmonic violinist Vijay Gupta ['07MM] told the inmates, it was his privilege to bring the music to them. His quartet began with the first movement of Haydn's "Sunrise," and the reaction was immediate.

A woman in the first row closed her eyes and smiled. In the second row, two women wept. And in the third row, a woman sat upright on the edge of her seat, hands clasped under her chin, a look of wonderment on her face.

The light was harsh, and through the windows of the multipurpose area on the second floor of Twin Towers, rows of small cells could be seen. So it wasn't the most intimate of venues, nor the cheeriest, but that didn't matter.

When the first piece ended, there were howls of approval. Some of the women stood and applauded, and the musicians seemed just as awed as their fans.

"Thank you for reminding us why we make music in the first place," Gupta told the audience.

And then it was on to the second movement of Mozart's Duo in B-flat, and as I listened, less than a week before Thanksgiving, I noted a message scrawled on a blackboard:

"When there is compassion, giving is not a burden but a joy."

Gupta began performing at homeless shelters and mental health agencies several years ago after meeting my friend Nathaniel Ayers. Gupta was inspired by the Juilliard-trained musician, who was diagnosed with schizophrenia decades ago and ended up homeless on skid row, where he played music day and night to escape his troubles.

Gupta and Adam Crane, another mutual friend, formed a nonprofit called Street Symphony and began recruiting local musicians for their cause. And then Gupta met L.A. County Superior Court Judge Rand Rubin, who gladly arranged for Gupta and his cohorts to go to jail.

Rubin was a backer of the county's merit-based incarceration program, in which motivated inmates study while in jail to prepare for life after release. Recidivism among participants is 27% lower than for the general population, Rubin said, and he thought music would be a soothing and enriching reward for the enrollees.

On Friday, Rubin told the inmates that he and other judges would like for them to move past the revolving door of incarceration. The jail concert they were about to hear, he told them before introducing the musicians, would be the 57th in three years.

"We have had classical, gypsy music, jazz, rhythm-only percussion, and they love all music, absolutely," Rubin told me. "All you have to do is introduce it and there's almost an immediate bond between those in custody and the musicians."

Gupta told me he thinks the enthusiastic reactions are not about the genre of music.

When he first visited Ayers at a skid row mental health agency, Gupta said, it occurred to him that "this place needs music as much as the concert hall needs it."

He reached out to Marv Southard, director of the county's mental health department, and the concerts began falling into place all over town — a total of 160 and counting, including the 57 jail concerts.

"The more I saw, the more I felt I didn't have a choice not to play the concerts," said Gupta.