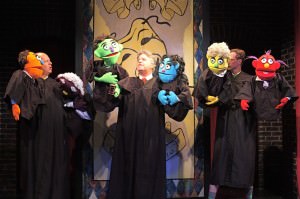 Like no justice before him, the 78-year-old jurist is being portrayed in works that draw on his words and legacy as the longest-serving sitting justice and one of the court’s most polarizing figures.

Justice Scalias are appearing in a stage play, an opera and a puppet show, to name three. The actual Justice Scalia ascribes his proliferating stage presence to the media culture of the modern age.

“It’s much more of a celebrity society than it used to be,” he said. “Supreme Court justices now are on television, they’re in the newspapers, blah, blah, blah.”

In real life, Justice Scalia usually delights conservatives and vexes liberals, a tension that plays prominently in the theatrical works.

“Antonin Scalia is in a class by himself,” said playwright John Strand, whose drama, “The Originalist,” is set to open in March at Washington’s Arena Stage. While hesitating to call him a tragic hero, Mr. Strand likens the 1986 Reagan appointee to King Lear or Richard III, Shakespearean characters of grand and sometimes frustrated ambitions.

Evoking Mozart’s “The Magic Flute” and “Don Giovanni,” Derrick Wang’s comic opera, “Scalia/Ginsburg,” puts the justice through a series of supernatural ordeals that test his jurisprudential theories. In one aria, “The Justices Are Blind,” Justice Scalia rails against his colleagues for outvoting him.

“Though you are all aligned/In your decision to flout this,/The Constitution says/Absolutely nothing about this,” Justice Scalia sings, with a line taken from his dissent in Planned Parenthood of Southeastern Pennsylvania v. Casey, a 1992 decision upholding abortion rights.

For counterpoint, Mr. Wang employs Justice Scalia’s courtroom adversary—and real-world friend—Justice Ruth Bader Ginsburg. She crashes through a glass ceiling onto the stage where she confronts Justice Scalia with her concept of a living Constitution.

“How many times must I tell you,/Dear Mister Justice Scalia:/You’d spare us such pain/If you’d just entertain/This idea…” she says.

“Oh, Ruth, can you read?/You’re aware of the text,/Yet so proudly you’ve failed to derive its true/meaning,” Justice Scalia responds, to the tune of “The Star-Spangled Banner.”

Mr. Wang, 30 years old, said his inspiration for the work came during his first year at the University of Maryland School of Law, where he discovered Justice Scalia’s favorite expressive vehicle: the dissent.

“Every time I saw the three magic words, ‘Scalia, J., dissenting,’ there would be an operatic outpouring…a very dramatic, very powerful piece of prose. I speculate that it’s that spirit that inspires a lot of people, myself included, to examine his opinions through the lens of art,” said Mr. Wang, who as an undergrad wrote music for Harvard’s Hasty Pudding shows.