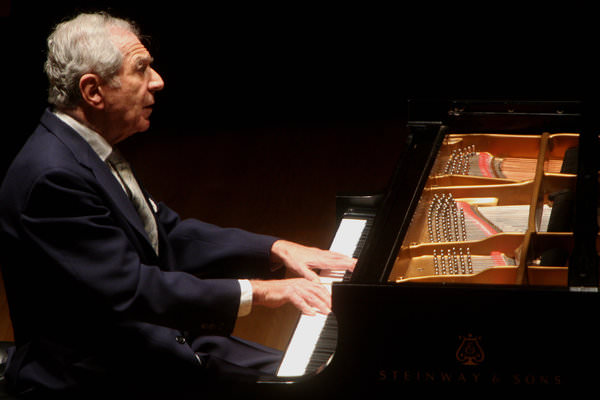 In his long and distinguished career as a pianist, Claude Frank appeared with the world’s foremost orchestras, at major festivals, and at its most prestigious universities. He often performed with his wife, the late pianist Lilian Kallir, and gave joint recitals with his daughter, violinist Pamela Frank.

One review of a performance with Pamela read: "From the first notes, there was the constant reminder of the security of their collaborative viewpoint, the refreshing buzz of the interplay between idea and response, and their obvious pleasure at uncovering some nuance or emphasis that sent the music spinning."

In chamber music, Frank collaborated with such ensembles as the Tokyo String Quartet, Guarneri Quartet, Juilliard Quartet, Cleveland Quartet, Emerson Quartet, American Quartet, Mendelssohn Quartet, and the London Mozart Players, as well as with Alexander Schneider’s chamber ensembles and at the Metropolitan Museum of Art. He spent 19 summers at the Marlboro Festival and appeared at other festivals including the Gstaad Festival in Switzerland, the Midsummer Mozart Festival in California, and New York’s Mostly Mozart Festival.

A milestone in Claude Frank’s career was his recording on RCA of the 32 Beethoven sonatas, as well as his worldwide performances of the cycle. Time Magazine proclaimed it as one of the year’s Ten Best, and High Fidelity and Stereo Review recommended it above other renditions. Mr. Frank also recorded the cycle of Beethoven's Sonatas for Violin and Piano with his daughter Pamela.

Frank was born to a Jewish family in Nuremberg and lived there until the age of 12. His given name at birth was Claus Johannes Frank, the "Johannes" a tribute to Brahms, whose music his mother loved.

As Hitler came to power in Germany, Frank joined his father in Brussels. Shortly thereafter he went to live in Paris, where he studied in the Paris Conservatoire. The German occupation of France forced Mr. Frank to leave, and he traveled to Spain. Overheard at the piano, he was invited to perform at a party given by the Brazilian ambassador. The American consul, who was a guest at that party, gave Frank a visa to come to the United States.

Once in New York, Claude Frank studied with Artur Schnabel and Karl Ulrich Schnabel, and studied composition and conducting at Columbia University. He became an American citizen in 1944 and served in the U.S. military, first in Germany and then in Japan.

After the war, he studied with Serge Koussevitzky at Tanglewood. He gave his recital debut at Town Hall in 1947, and in 1959 he made his New York Philharmonic debut with Leonard Bernstein. With co-author Hawley Roddick he wrote a memoir, The Music That Saved My Life: From Hitler's Germany to the World's Concert Stages.

In a New York Times article in 1986, "Mr. Frank said he remained 'tremendously' influenced by Artur Schnabel… [and was] still concerned, like Schnabel, with the structure of a piece." Peter Dobrin wrote that Frank was "much admired for interpretations elegantly perched between penetrating expressivity and rigorous intellectual inquest."

His playing was renowned for its beauty. YSM alumnus Michael Mizrahi wrote in a tribute: "He radiated a love of not only all that was beautiful, but all that had the potential to be beautiful… Our lessons became inspirational searches for the towering beauty present in Bach, Mozart, Beethoven, Schubert, Brahms, and through those endless searches we would find the potential for beauty in ourselves."

Another former student recalls that, when she was nervous before a performance, Frank told her: “There is nothing to be nervous about. Just show everyone how beautiful the music is.”

Other former students cite his generosity: complimenting his tie, for example, might prompt Frank to give it to the admirer on the spot.

"Those of us who knew him loved him dearly," wrote YSM Dean Robert Blocker, "for he gave to all he touched the extraordinary gifts of his wisdom, wit, artistry, and insatiable passion for beautiful music."

Claude Frank was twice the recipient of the Sanford Medal, the highest honor that the Yale School of Music can bestow. On his 80th birthday he was presented the Stoeckel Teaching Award.

Frank's repertoire ranged from Bach to Ginastera and Roger Sessions, but his playing was most renowned for his interpretations of the classical literature. He wrote in his autobiography: "The four composers I love most, chronologically, are Bach, Mozart, Beethoven, and Schubert… Every note by them is holy. I present their music as if they are gifts from God, which of course they are."