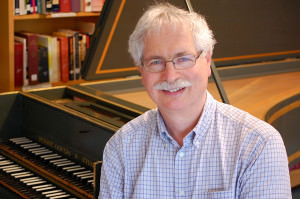 The Faculty Artist Series at the Yale School of Music presents harpsichordist Arthur Haas in a solo recital on Wednesday, January 21 at 7:30 pm.

1685 had far-reaching consequences for the history of music. Three of the most distinguished Baroque musicians and composers were born that year: Johann Sebastian Bach, George Frederic Handel, and Domenico Scarlatti. This recital will celebrate these composers' birth year with Handel's Suite in E Major, three sonatas by Scarlatti, and Bach's Chromatic Fantasy and Fugue.

In addition, Haas will perform music written in or around 1685 by Henry Purcell, Bernardo Pasquini, and Jean-Henri D'Anglebert. These composers comprise the first half of the program, with Purcell's Suite in G minor, Z. 661; three pieces in G minor by Pasquini; and D'Anglebert's Transcriptions de Lully.

An authority of French Baroque music, Mr. Haas has been featured as a soloist in numerous European and American baroque festivals, such as the Spectaculum (Vienna), Festwochen der alten Musik (Innsbruck), Dresdener Musikfestspiele (Germany) Mostly Mozart (New York), and the Berkeley Music Festival (California). He is a member of the Aulos Ensemble, Musical Assembly, and Collegium Atlantis.

For more information, call the Yale School of Music concert office at 203 432-4158 or visit the box office at 470 College Street.