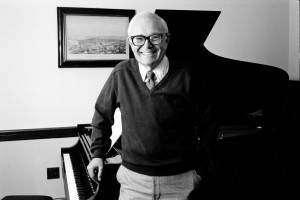 Ezra Laderman, an American composer who became widely known for his 1993 opera, “Marilyn,” which chronicled the waning days of Marilyn Monroe, died on Saturday at his home in New Haven. He was 90.

His death was announced by the Yale School of Music, where he was an emeritus professor and a former dean.

Mr. Laderman was a prolific composer of symphonic, chamber and vocal music, as well as a bevy of works for traditionally neglected instruments like the viola and the bassoon. But on account of its subject matter, it was “Marilyn,” commissioned to honor the 50th anniversary of the New York City Opera, that made him known to the general public.

Throughout his career, Mr. Laderman adopted an ecumenical style, which could range over tonality and atonality in a single piece. His most acclaimed compositions — critics seemed to warm in particular to his chamber works — were praised for their rich textures, thoughtful construction and inherent musical drama.

Among the soloists to perform his music were the violinist Elmar Oliveira, the cellist Yo-Yo Ma, the flutist Jean-Pierre Rampal and the pianist Emanuel Ax. Mr. Laderman received commissions from the New York and Los Angeles Philharmonics, the Chicago Symphony and the Philadelphia Orchestra, among other ensembles.

Reviewing a recording by the Cassatt Quartet of Mr. Laderman’s String Quartet No. 6 in 2002, American Record Guide called it “a deeply engaging experience.”

Mr. Laderman’s eclecticism was on abundant display in “Marilyn,” which received its world premiere at City Opera on Oct. 6, 1993, with the soprano Kathryn Gamberoni in the title role. The opera, with a libretto by the poet Norman Rosten, was performed under the baton of Hal France; Mr. Laderman’s score fused tonal, atonal and serial elements with jazz, folk and pop motifs evocative of Monroe’s era.

The production garnered advance publicity round the world, with every performance sold out well ahead of time. The reviews were mixed at best, with some critics embracing the score for its stylistic range but others dismissing it as a pastiche.