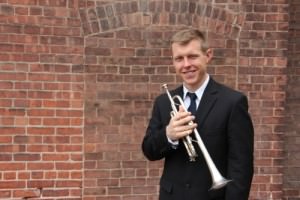 Carl Stanley '15MM has won a trumpet position in the West Point Band at the U.S. Military Academy.

Raised in a musical household in California, Carl Stanley has seen his trumpet career take him around the globe. After completing his B.A. in music in 2008 from California State University, East Bay, Mr. Stanley won a position with the United States Air Force Heritage of America Band in Hampton, Virginia.

In his four years as Principal Trumpet in the Concert Band and a member of the Heritage Brass Quintet, Mr. Stanley toured throughout the United States, performing in concerts, recitals, ceremonies, professional sporting events, competitions, and conventions as an Airman musician. Deploying to the Middle East, Mr. Stanley was also able to perform in the AFCENT Band, which utilized music as a partnership-building tool to better U.S. relations in war-torn regions. Stanley left the Air Force in 2013 and is now completing his Master of Music degree at the Yale School of Music.

About the West Point Band

The West Point Band is the Army’s oldest musical organization and continues to provide world-class music to educate, train, and inspire the Corps of Cadets and to serve as ambassadors of the United States Military Academy and the Army to local, national, and international communities. Its innovative programs and performances are enjoyed across the globe through regular television, radio, and recordings. The West Point Band traces its lineage back to a single drummer and fifer left to maintain the tradition of military music at West Point after the Revolutionary War. Over the next 200 years, the band evolved into one of the most capable and versatile professional performing groups in the world.

Many band members hold graduate degrees from the world’s finest music schools and all have earned substantial professional musical achievements prior to serving their country as professional musicians. The organization fulfills more than 1600 official missions annually, including military and patriotic ceremonies, public concerts, parades, professional and collegiate sporting events, internet, radio and television broadcasts, and numerous ceremonies and special events for the Corps of Cadets, the West Point community, New York City, and the broader area of the northeastern United States.

As the senior premier musical representative of the United States Army, the band has appeared at numerous historical events. It performed at dedication and rededication ceremonies of the Erie Canal; at the St. Louis, Chicago and New York World’s Fairs; Grand Central Station, the Statue of Liberty, and at the battlefield at Gettysburg; for the funerals of Ulysses S. Grant and Franklin D. Roosevelt as well as the inaugurations of numerous presidents. Additionally, the West Point Band has collaborated with some of the finest musical ensembles in the country, including the New York Philharmonic and the Boston Pops. Members of the West Point Band have also been showcased at Carnegie Hall and Lincoln Center The Today Show, 60 Minutes, Dateline NBC, A&E and documentaries occurring on the History and Discovery Channels, and even featured on their own national broadcast of “A West Point Holiday Show” on Fox News during the holidays in 2011, 2012, and 2013.

Additionally, the band also collaborates with Columbia University, and the English and Philosophy, Geography, and History departments at West Point as dynamic teaching resources. As performers and educators, the musicians of the West Point Band continue to present innovative performances and productions while providing the Corps of Cadets with a piece of living history.