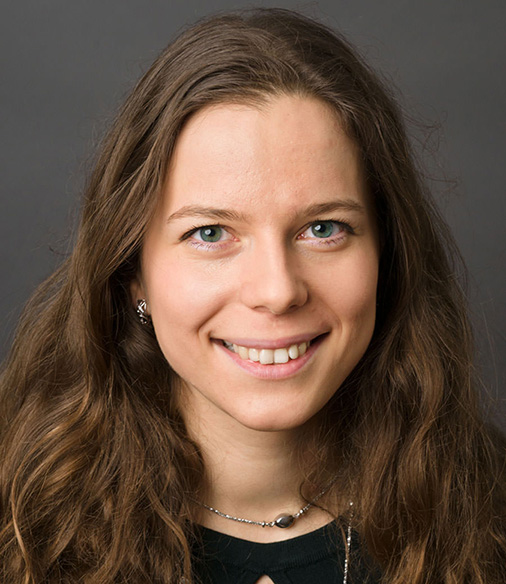 Composer Polina Nazaykinskaya '10 MM, '13 AD has been awarded the 2015 Paul and Daisy Soros Fellowship for New Americans. She is one of thirty selected from a wide variety of fields to receive the fellowship, which provides tuition and living expenses for a graduate degree program. Nazaykinskaya is currently pursuing her doctorate in composition at the City University of New York.

About the Fellowship
Paul and Daisy Soros, Hungarian immigrants and American philanthropists, established their fellowship program for New Americans in 1997. They wished to "give back" to the country that had afforded them and their children such great opportunities; they also felt that assisting young New Americans at critical points in their educations was an unmet need. In addition, they wished to call attention of all Americans to the extensive and diverse contributions of New Americans to the quality of life in this country.

The program of fellowships they shaped honors and supports the graduate educations of 30 New Americans (permanent residents or naturalized citizens if born abroad; otherwise children of naturalized citizen parents) each year. Fellows receive tuition and living expenses for a graduate degree program. They are selected on the basis of merit; the specific criteria emphasize creativity, originality, initiative and sustained accomplishment. Each fellows attends two weekend conferences of fellows.

About Polina Nazaykinskaya
Born in Togliatti, an industrial city on the Volga River in Russia, Polina Nazaykinskaya was surrounded by music growing up. She entered the Moscow Tchaikovsky Conservatory with the intention of becoming a concert violinist, but quickly realized that her calling was composition. As she finished her bachelor’s degree, she realized that she wanted to be in the United States, where there were more opportunities to be a professional composer and musician.

At the Yale School of Music, Polina worked with Christopher Theofanidis and Ezra Laderman, and completed a master’s degree in composition and theory, in addition to receiving an artist diploma in composition. “Winter Bells”, the first orchestral piece that Polina wrote in the United States, received wide acclaim, and was recorded by Sony Music in 2010.

Now pursuing a doctorate degree in composition at the Graduate Center, CUNY, Polina is studying with Tania León. Polina has won numerous awards, including the Charles Ives Scholarship from the American Academy of Arts and Letters, and has garnered performances by ensembles including the Minnesota Orchestra, the United States Army Orchestra, and the Russian National Orchestra.Through music, Polina would like to explore the difficulty of political choices and the decline of democratic institutions; the rise of nationalistic tendencies, and the creation of a culture in which authority and obedience are preferred to freedom.