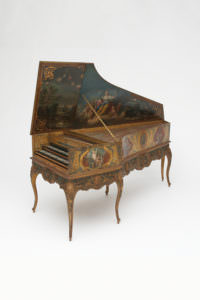 Some time in the late nineteenth century, an unknown antiques dealer decided that this harpsichord wasn’t glamorous enough. It’s a rare 1770 instrument by Pascal Taskin, harpsichord maker to King Louis XV and head of the most admired workshop in the history of French harpsichords. Nevertheless, it got a makeover. Taskin’s name was allowed to remain on it—but “Restored by Taskin” was added, to suggest an earlier maker. Paintings were incorporated to imply that it once belonged to Émilie du Châtelet (1706–49), an important French scholar and Voltaire’s mistress from 1733 to 1740. The woman seen here on the inside of the lid is meant to resemble her, and the chateau to her right is Cirey, where she lived with Voltaire.

When the harpsichord was donated to the Yale Collection of Musical Instruments in 1957, it came with an essay asserting a date in the early 1700s and du Châtelet ownership. But to Richard Rephann ’64MusM (1932–2014), who became director of the collection in 1968, it was an unmistakable Taskin. He unraveled the mystery, exposed the paintings as fakes, and analyzed the instrument’s unique design and bold workmanship—the real reasons for the rarity and historical value of this harpsichord.