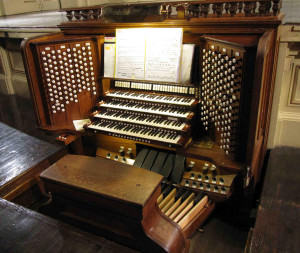 Organists from throughout the Northeast will gather in New Haven early next week for the Northeast Regional Convention of the American Guild of Organists. Among the many activities planned are a series of free, public concerts featuring "The King of Instruments."

For organists and fans of the instrument, New Haven is practically a mecca for fine organs and quality organists. Yale University alone boasts five world-class instruments.

"We do have many wonderful instruments in New Haven, a lot of organs in different styles, in academic and church settings, and a lot of music making," said organist Joseph Ripka, one of the organizers of the AGO event.

Those instruments will be played by a lineup of internationally recognized organists, including Diane Meredith Belcher, Ahreum Han, as well as local favorites Thomas Murray and Martin Jean, in a series of free concerts throughout New Haven.

The convention will also hold daily workshops and tours of the Yale Music Library and instrument collection.

Convention participants will also be treated to a special day trip to the picturesque village of Stonington to hear a recital by Dexter Kennedy ['14 MM]. The 25 year-old organist was the 2014 grand prizewinner of France's Grand Prix de Chartres, the longest running, and what many consider to be the most prestigious international organ competition in the world.