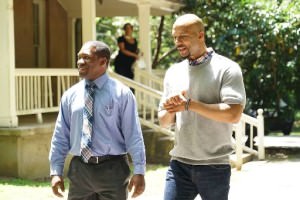 Growing up in Ottawa, bassoonist Dantes Rameau was a fan of hip-hop artist Common. So Rameau knew it was an uncommon day when he answered a knock at the door during rehearsals earlier this month at the Gilbert House recreation center in southwest Atlanta only to find the musician-actor waiting with a TV crew on the porch.

In his role as a guest host on the new Fox TV show Knock Knock Live that premiered Tuesday, Common was paying a surprise visit to Rameau, co-founder and executive director of the Atlanta Music Project. Common’s mission: to lay some gifts on the Atlanta nonprofit that provides tuition-free music education to under-served youths.

“I had no idea this was going to happen until I opened the door and there was Common and a bunch of cameras in my face,” Rameau, 32, told The Atlanta Journal-Constitution. “It took a lot of coordination and colluding and hiding by staff, board members, students and their parents. They managed to keep it a secret and lure me to be in the right place at the right time. I was really stunned.”

Rameau’s shock soon gave way to victorious fist pumps when he discovered that Common was there to bestow a fully customized 15-passenger van to help the Atlanta Music Project transport its students to and from performances. Even sweeter, the tricked-out 2015 Ford Transit-350 was laden with string, brass and keyboard instruments. And automotive brands Maaco and Meineke, who provided the wheels and musical equipment, also donated $50,000.

That brought tears to Rameau’s eyes, captured in the five-minute “Knock Knock Live” segment that ended with Atlanta Music Project students accompanying Common on the Oscar-winning song “Glory” from the film in which he co-starred, “Selma.”

“Watching the kids perform with Common, I was telling myself, ‘You see, guys: Look who’s here performing with you, and you can’t do this with him without all the (hard) work. It’s worth it!’” Rameau said in the segment.

Rameau said the gifts will be a “game-changer” for his grass-roots group that launched in 2010 with seven students from the Gilbert House neighborhood. It now serves 200 students at four sites, and plans to reach 300 in two years.

AMP provides its students with an instrument, a “teaching artist,” classes and numerous performance opportunities. The group eschews entrance auditions, requiring only that the musicians commit to attending all classes.

Rameau has raised more than $1.3 million for the organization but was not fundraising for a van, figuring the nonprofit wouldn’t be able to afford one and insurance. Instead, it has rented charter buses for the students and U-Hauls to transport equipment for many of its roughly 25 concerts per year.