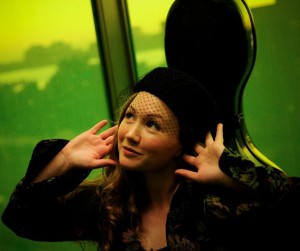 "American cellist Ashley Bathgate has been described as an “eloquent new music interpreter” (The New York Times) and “a rising star of her instrument” (Albany Times Union) who combines “bittersweet lyricism along with ferocious chops”(New York Magazine). Her “impish ferocity”, “rich tone” and “imaginative phrasing” (The New York Times) have made her one of the most sought after performers of her time. The desire to create a dynamic energy exchange with her audience and build upon the ensuing chemistry is a pillar of Bathgate’s philosophy as a performer.”

Phew! For those who don’t know, Ashley Bathgate is originally from Saratoga Springs and began her cello studies with the late Rudolf Doblin, principal cellist and assistant music director of the Buffalo Philharmonic in the 1950’s. After his passing, she resumed her tutelage with Ann Alton at Skidmore College. She then went on to study at Bard with Luis Garcia-Renart  and then at the Yale University School of Music with renowned cellist, Aldo Parisot. Not bad for a local girl.

With Bathgate’s adventurous spirit and “affinity to dynamism drives her to venture into previously uncharted areas of ground-breaking sounds and techniques and breaking the mold of a cello’s traditionally perceived voice,” it is not surprising that she would become a member of the Bang on a Can All-Stars. And this is what brings her to MASS MoCA on Friday as part of the annual Bang on a Can Summer Music Festival.

Drawing inspiration from the visual art on display in the galleries at MASS MoCA, Bang on a Can Plays Art showcases music that interacts with the art on various levels—stylistically, thematically, and whimsically.

Bang on a Can responds to the work of Clifford Ross’ Landscape Seen & Imagined, an exhibit that documents Clifford Ross’s longstanding project to reconcile realism and abstraction. The exhibition takes place throughout two buildings, six galleries, and an exterior performing arts courtyard. Among other works, the exhibition includes a 24’ high x 114’ long photograph on raw wood that spans the length of MASS MoCA’s tallest gallery and an immersive installation of animated video on twelve separate 24’ high screens.

"While this show is about acute observation and the leaps into abstraction that can happen with close viewing, it is also about the divergence between the world as we see it and as we imagine it might be.” —MASS MoCA Director Joseph Thompson.

Bang on a Can All-Stars’ cellist Ashley Bathgate plays a heartfelt program drawing from Australian composer Kate Moore‘s collection Stories for Ocean Shells. Moore was a composer fellow ten years ago at the Bang on a Can Summer Music Festival at MASS MoCA. The intricately hypnotic emotionality of Moore’s music has made her one of the composer stars of her generation.

Stories for Ocean Shells tells tales of travel, love, sadness and beauty – that one great story – the one known as life. The works symbolize a highly personal communication between two artists, one a composer, the other a cellist, from opposite corners of the world. Their lives collide, intersect and intertwine in strange and unexpected ways. This collection is their story told from afar like letters of memories, experiences, thoughts and yearning – seeking true honesty and through observation, a quest to see the world through vivid eyes.