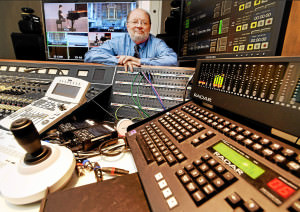 NEW HAVEN » Yale’s stream of concert-ness has become a torrent of sorts.

As a new semester of music emanates from the Yale School of Music’s students and faculty, a well-resourced group of Yale techs is again taking advantage of a fast current to live-stream those classical music performances. The growing service is enhanced by new technology and high-seed Internet in homes.

Since 2010, when clarinetist Sara Wollmacher’s 95-year-old grandmother Julia Wollmacher watched her degree recital online from far away, relatives of Yale musicians have been able to watch performances in New Haven from points worldwide. The individual recitals require a password, but about 70 concerts a year of Yale Philharmonia, Yale Concert Band and other musicians are available, live and free, to anyone who clicks on the Yale site as they’re happening. A distribution company makes sure the stream works in different formats (iPad, Windows, etc.).

As second-year doctoral student Sean Kennard practiced on Morse Recital Hall’s grand piano Tuesday (to simulate a streaming event since most of YSM’s grad students aren’t back in town yet), directing engineer Eugene Kimball and Yale School of Music Associate Dean Michael Yaffe talked about streaming, which has similarly taken over the world of video rentals for movies and TV series.

They met with a reporter downstairs from Morse in Control Room A of the Fred Plaut Recording Studio in Sprague Hall, in front of a flat-screen monitor and a mixing board acquired from Walt Disney World.

Individual streams of Yale performances can number as many as 500 viewers worldwide, a number likely to rise as the popularity of the service increases.

“We do almost all of our public events,” said Yaffe, the affable administrator who oversees the streaming. “We started maybe 5 years ago.”

Yale officials had a technology meeting at the time on outreach ideas “and this one came to the surface as, in some ways, an easy win where we could disseminate what we do to a larger audience, technologically, without quite as much effort as you might do ... on some of our bigger ideas — like on-demand streaming that’s recorded,” said Yaffe.

That on-demand video is also offered on the website at https://music.yale.edu/concerts/watch/, where you’ll find Peter Oundjian conducting the Yale Philharmonia in “An American in Paris.”

The live streaming address for events is https://music.yale.edu/livestream/ and there’s a list of upcoming concerts on the website music.yale.edu also (including Yale Philharmonia on Sept. 25 and the Brentano String Quartet Sept. 29). You may want to bookmark that for further reference; the quality of performances is often extraordinary.

Kimball’s team started with one camera in acoustically crisp Morse Recital Hall and recently added two more. It also has a new camera in small Sudler Hall next door and an under-balcony cam in ornate Woolsey Hall (connected via underground cable all the way to Sprague Hall). Also, the Collection of Musical Instruments on Hillhouse Avenue streams its concerts, as does the Yale’s Norfolk Chamber Music Festival in summer.

“It’s not television,” Yaffe said. “It’s not as high tech. The idea is to make you feel like you’re in the concert hall.”