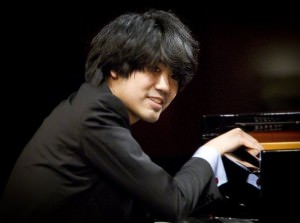 The first American to reach the Van Cliburn Piano Competition finals in 16 years, Sean Chen is bringing the Romantics to Los Alamos next weekend.[…]

The 27-year-old pianist grew up near Los Angeles, where he first put fingertips to keys at the age of 2. He began piano lessons at 5, winning prizes at the California International Young Artist Competition, the Los Angeles Music Center’s Spotlight Award and scholarships while he was still in high school.

Neither of his parents were professional musicians. But he says he developed a good ear by watching movies and playing video games.

Chen’s academic prowess led to acceptance by both Harvard and the Massachusetts Institute of Technology, while his musical talent led him to Juilliard. He had been hoping rejection from one or the other would lead him either to college or conservatory without having to make a decision.

“Any kind of artistic path is always risky,” he said in a telephone interview from his home in New Haven, Conn., where he earned his Artist Diploma at the Yale School of Music in 2014. “There’s also the consideration of being from an Asian background; parents don’t want their kids to suffer.”

His Steinway Series recitals have taken him to the Smithsonian in Washington, D.C., the Salk Institute in San Diego, Calif., and New Orleans and more. The New York Times praised Chen’s “alluring, colorfully shaded renditions” of works by Scriabin and Ravel.

Chen’s Los Alamos program alternates a suite of etudes by Chopin and Debussy to explore their stylistic differences and similarities.

“I play with this concept quite a bit,” he said. “With Debussy, he treats the themes both horizontally and vertically in terms of harmony; it’s moving in thirds. The structure of Chopin’s etudes are pretty standard. Debussy experiments more with the form. Debussy obviously had Chopin in mind when he wrote these.”