The News-Gazette | By Melissa Merli 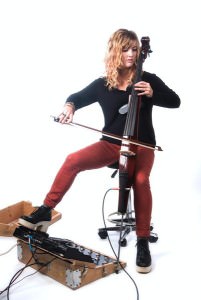 Studio Visit is a Q&A with a local artist, in this case, Shannon Hayden, 25. The professional cellist and composer lives on her family farm in Martinsville with her parents, Ron Hayden, a carpenter and farmer, and Cathy Hayden, director of the Clark County Health Department. The family also owns a home in Oakland that was a parsonage. Shannon often rehearses and records in the former church's sanctuary. She will perform twice this month in Champaign. She recently chatted with The News-Gazette's Melissa Merli.

Did you go to Yale for an undergraduate degree?

Actually, I went there for a master's program when I was 18. I didn't do undergraduate.

I was home-schooled by my parents and took music classes with professors at Indiana University all through high school.

When did you first start studying the cello?

I was 7 when I started in the studio of Terrine Gomez in Champaign. She's actually a violin teacher, but her in-studio cello teacher is Natalia Khoma.

I studied with Natalia for two years, and she was the best teacher I ever had. After that, I studied with Janos Starker (who died in 2013) at Indiana University until I went to the Yale School of Music.

(In his recommendation letter for Hayden, the internationally known Starker wrote, "She can do anything with the cello, but what will it be?")

It was awesome. For me, it was the perfect balance between a music conservatory and a great academic institution, and that's what I wanted.

I also applied to many other conservatories and received a full scholarship offer from Juilliard, but they don't ask for your SATs, so that was not a place where I wanted to spend four years.

Yale offered an undergraduate program, and that's what I was applying for at other schools, but the ultimate professor I wanted to study with was at Yale. And the catch was he taught only graduate students. When I was out East, the professor, Aldo Parisot, invited me to play for him anyway. After I played for him, he said, "I'll see you in September."

So we had to figure out what kind of program I would be in. Eventually, the dean decided on a three-year master's program. During that time, I was able to take all the academic undergraduate courses I wanted to take while finishing my master's in music performance.

What do you ultimately want to do with your music?

Just perform as much as possible in great places for wonderful audiences and continue developing my artistic career.