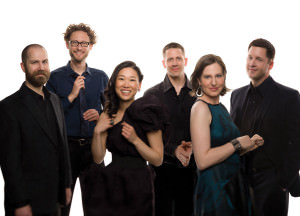 The six pieces that comprise Hand Eye are each written by a single member of the collective: Checkered Shade by Timo Andres, South Catalina by Chris Cerrone, Conduit by Robert Honstein, Mine, Mime, Meme by Andrew Norman, By-By Huey by Ted Hearne, and Cast by Jacob Cooper.

Sleeping Giant is “rapidly gaining notice for their daring innovations, stylistic range and acute attention to instrumental nuance” (WQXR). All six members are graduates of the Yale School of Music; the collective was formed in New Haven and named for the eponymous park in Hamden. The pieces of Hand Eye were inspired by works of art in the private collection of Maxine and Stuart Frankel.
Founded at Oberlin Conservatory in 1996, eighth blackbird has been been called "a brand name…defined by adventure, vibrancy, and quality." They are three-time Grammy Award-winners, and over the course of two decades have commissioned and premiered hundreds of works, including Steve Reich's Double Sextet, which went on to win the Pulitzer Prize in 2009.

The concert takes place in Morse Recital Hall in Sprague Hall (470 College Street, New Haven). Tickets start at $26, $13 with student ID. The event is part of the Oneppo Chamber Music Series, which is directed by David Shifrin. 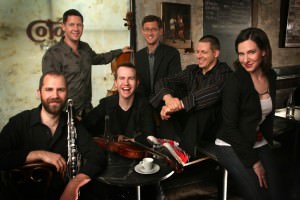 eighth blackbird’s “super-musicians” (Los Angeles Times) combine the finesse of a string quartet, the energy of a rock band, and the audacity of a storefront theater company. The Chicago-based, three-time GRAMMY Award-winning sextet has provoked and impressed audiences for 20 years across the country and around the world with impeccable precision and a signature style.

One the industry’s most formidable ensembles, eighth blackbird (8bb) began in 1996 as a group of six entrepreneurial Oberlin Conservatory students and quickly became “a brand-name…defined by adventure, vibrancy and quality….known for performing from memory, employing choreography and collaborations with theater artists, lighting designers and even puppetry artists” (Detroit Free Press).

Over the course of two decades, 8bb has commissioned and premiered hundreds of works by dozens of composers including David T. Little, Steven Mackey, Missy Mazzoli, and Steve Reich, whose commissioned work, Double Sextet, went on to win the Pulitzer Prize (2009). A long-term relationship with Chicago’s Cedille Records has produced six acclaimed recordings and three impressive Grammy Awards: for strange imaginary animals (2008), Lonely Motel: Music from Slide (2011), and Meanwhile (2013).

8bb’s mission extends beyond performance to curation and education. The ensemble served as Music Director of the Ojai Music Festival (2009), enjoyed a three-year residency at the Curtis Institute of Music, and holds ongoing Ensemble-in-Residence positions at the University of Richmond and the University of Chicago. The 2015–16 season brings a lively residency at Chicago’s Museum of Contemporary Art, featuring open rehearsals, an interactive gallery installation, performances, and public talks.