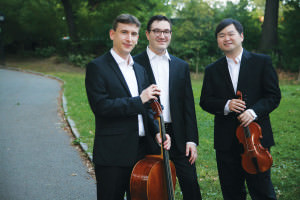 The Yale Collection of Musical Instruments presents The Sebastians in a concert on Sunday, October 25 at 3:00 pm.

The performance, called Orfeo del Violino, will feature solo and trio sonatas by Arcangelo Corelli and his predecessors.

"As the legendary Orpheus used his music as a rhetorical weapon, Corelli brought a new level of virtuosity and expression to violin playing," explain The Sebastians about this program. "Corelli’s infectious harmonic and structural language took Europe by storm, but it was his older Roman compatriots, including Lelio Colista, Girolamo Frescobaldi, and Alessandro Stradella, who set the stage."

Praised as "everywhere sharp-edged and engaging," The Sebastians are in their fourth season as ensemble-in-residence at All Angels' Church in New York City. The group's core quartet is comprised of violinists Daniel S. Lee and Nicholas DiEugenio, cellist Ezra Seltzer, and keyboardist Jeffrey Grossman. All except Grossman are alumni of the Yale School of Music. Founding members Lee and DiEugenio are the ensemble's artistic directors.

William Purvis is the Director of the Collection of Musical Instruments.

To purchase tickets, visit music.yale.edu or contact the he Collection at 203 432-0822.
TICKETS