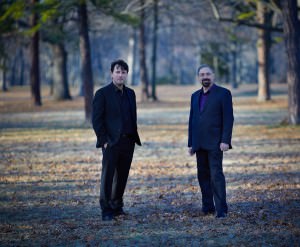 The Faculty Artist Series at the Yale School of Music presents Ettore Causa and Boris Berman on Tuesday, October 27 at 7:30 pm. The acclaimed YSM faculty members will perform works from their new recording, Brahms & Schumann: Transcriptions for Viola & Piano.

First on the program is Brahms' Cello Sonata in E minor, Op. 38. The work pays homage to J. S. Bach, and the principal theme of the first and third movements are based on Contrapunctus 4 and 13 from The Art of the Fugue.

After intermission, the program will continue with three works by Schumann that were originally written for wind instruments: Drei Fantasiestücke for clarinet and piano; Romances for oboe and piano; and Adagio and Allegro for horn and piano. These duos were part of Schumann's plan to compose a sonata or similar duo with piano for each instrument, a task that was quickly forgotten as his attention was diverted to orchestral works. 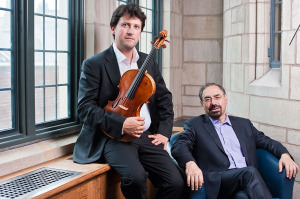 Closing the program will be the Intermezzo from the well-known F-A-E Sonata, originally for violin and piano. This work was a collaborative effort by Schumann, Brahms, and Schumann's pupil Albert Dietrich, each of whom wrote a separate movement. The intermezzo was Schumann's contribution. The piece was composed as a gift to violinist Joseph Joachim, whom Schumann had befriended. Joachim had adopted the adage "Frei aber einsam" ("free but lonely") as his personal motto. The composers based the work on the notes F A E, the initials of this adage, as a musical code.