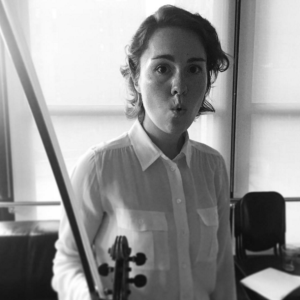 Last week, Kanye West performed "POWER" at a Democratic National Committee Fundraiser. Before he emerged, the curtain opened on a woman alone singing wordlessly, stacking her voice into a harmonized chorale and building to an arresting peak. This was Caroline Shaw, a 32-year-old contemporary classical composer who lives in Manhattan.

Shaw is a member of the vocal octet Roomful of Teeth, which has collaborated with tUnE-yArDs. She performed on Music for Heart and Breath, a modern classical work by the Arcade Fire’s Richard Reed Parry. In 2013, Shaw won the Pulitzer for her piece Partita for 8 Voices. The year before that, she was virtually unknown outside New York City classical circles.

West’s fascination with Shaw doesn’t seem to be passing: Yesterday, he posted a reworked version of 808s & Heartbreak’s "Say You Will" that featured her anxious, ear-catching murmurs and wails. Given his track record of finding and spotlighting unexpected voices on his projects, she seems one step away from appearing on his next album.

So now that she is about to be made famous, who is Caroline Shaw? In her music, she treats the human voice like something to be trapped, pulled at its edges, broken apart, and set free—it’s a pliable instrument that she seems determined to ply as far as possible. You can hear some of Meredith Monk, Björk, and Robert Ashley, but those are surface comparisons, and you’ll likely forget them once you push deeper into her music. Here are some pieces you can listen to now to get to know her better.

Six straight minutes of dazed, becalmed awe, like standing in a supermarket aisle at 5:45 a.m. and gazing dumbly at the endless row of cereal boxes. The singers chant "oooh" while medicated voices chant jargon-y things at you like "The 86th, 87th, and 88th points are located symmetrically across the central vertical axis of the wall." A spiritual cousin to Philip Glass’s Einstein on the Beach.