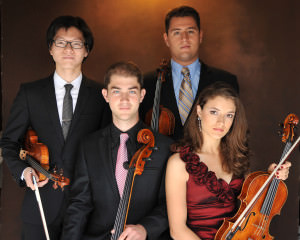 The Oneppo Chamber Music Series at the Yale School of Music presents a recital by the acclaimed Dover String Quartet on Tuesday, November 17 at 7:30 pm.

The program features quartets by Dvořák and Berg as well as Schubert's String Quintet in C major, with cellist Peter Wiley.

The recital will open with Antonin Dvořák's Quartet in F major, Op. 96, nicknamed the "American." Dvořák wrote this work on a long visit to the United States, right after writing his famous Symphony No. 9, "From the New World." Dvořák was inspired by American folk music, especially African-American spirituals, and by the peaceful midwestern landscape of his Iowa vacation home.

Next, the quartet will move into the twentieth century with Alban Berg's String Quartet, Op. 3. Berg, who focused much of his attention on vocal music throughout his career, wrote only a handful of instrumental chamber works, and this is his only string quartet.

After intermission, cellist Peter Wiley, a past member of the Beaux Arts Trio and Guarneri String Quartet, will join the Dover Quartet onstage for a performance of Franz Schubert's String Quintet in C major, D. 956. Written only two months before his death, this was Schubert's last chamber music composition, and is widely regarded as his finest.

The Dover String Quartet catapulted to international stardom following a stunning sweep of the 2013 Banff International String Quartet Competition, where they won not only the Grand Prize but all three Special Prizes. The quartet's members are violinists Joel Link and Bryan Lee, violist Milena Pajaro-van de Stadt, and cellist Camden Shaw.

The venue is Morse Recital Hall, located in Sprague Hall (470 College Street, New Haven). This concert is part of the Oneppo Chamber Music Series, which is directed by David Shifrin.

"The young American String Quartet of the moment…"
—The New Yorker

About the Dover Quartet 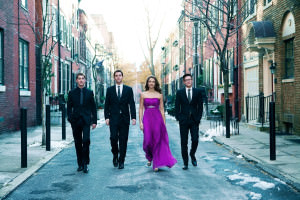 The Dover Quartet catapulted to international stardom following a sweep of the 2013 Banff International String Quartet Competition. The Philadelphia Inquirer lauded the Quartet’s “sound so distinctive as to be identified within mere minutes,” and The Washington Post raved that the Quartet “should be on must-hear list...a triumph.” The 2015–16 season features more than 100 concerts around the world, including the Dover Quartet’s debuts at Carnegie Hall, the Lucerne Festival, and Yale University, and on Lincoln Center’s Great Performers series.

Beginning in 2015–16, the Dover becomes the Faculty Quartet-in-Residence at Northwestern University, and will perform four concerts at Dumbarton Oaks in Washington, D.C., two of them featuring a new work written for the quartet by the Pulitzer Prize-winning composer Caroline Shaw. They will undertake three tours of Europe and their debut tour of Israel, and will perform for many of the most important sponsors in the United States. The Dover Quartet won not only the Grand Prize but all three Special Prizes at the 2013 Banff International String Quartet Competition, and also won top prizes at the Fischoff Competition and the Wigmore Hall International String Quartet Competition.

The Dover Quartet draws from the musical lineage of the Cleveland, Vermeer, and Guarneri Quartets, having studied at the Curtis Institute and Rice University’s Shepherd School of Music, where they were in residence 2011–2013. In 2013–14, the Quartet became the first-ever Quartet-in-Residence at the Curtis Institute of Music. They have been mentored extensively by Shmuel Ashkenasi, James Dunham, Norman Fischer, Kenneth Goldsmith, Joseph Silverstein, Arnold Steinhardt, Michael Tree, and Peter Wiley. The quartet is dedicated to sharing music with underserved communities and is an active member of Music for Food, an initiative to help musicians fight hunger in their home communities.