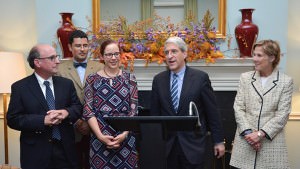 The staff members of the School of Music's Music in Schools Initiative — Michael Yaffe, Rubén Rodríguez, and Kate Gonzales — received the award for their work connecting Yale with the New Haven community. The President's citation reads:

By teaming to develop the innovative Music in Schools Program, they have reinforced Yale’s connections with the New Haven community and earned us national recognition for this model of cultural leadership.

In his letter of nomination, Dean Blocker said that -

The evolution of this venture, especially under the watchful eyes of Michael, Rubén, and Kate, has been extraordinary. And the enthusiasm, hope, and joy seen in these children and their families have united the many diverse populations of New Haven. In the closing concert of the Morse Academy this summer, Sprague Hall was almost filled to capacity with parents and friends who only two or three years earlier had not entered the campus, certainly not to see their children on an international stage.