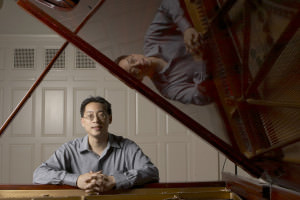 The Horowitz Piano Series at the Yale School of Music presents a recital by faculty pianist Melvin Chen on Wednesday, December 2 at 7:30 pm.

The premiere is of Shadows, a new piece written expressly for Chen by Jason Freeman for piano, laptop, and projection. Freeman's artistic practice focuses on using technology to engage diverse audiences in collaborative, experimental, and accessible musical experiences. The composer writes:

In Shadows, the pianist reads an open-form score from a laptop screen, choosing his own path through a series of connected musical fragments. At the same time, the laptop listens to the pianist, tracks the decisions he makes about what to play, and constantly updates the score in response. This dialogue between pianist and computer, actuated through a dynamic score, serves to amplify the expressive decisions made by the pianist, to subtly push him in new musical directions, and to create large-scale structural arcs in the music.

The evening will also include music by the influential composer Earle Brown, who is known for establishing singular formal and notational systems, and by intermedia composer and pianist Jaroslaw Kapuscinski. Brown's December 1952, written as part of Folio, broke ground with its graphic notation. Kapuscinski's Juicy is a lighthearted piece; the six-movement suite fuses live piano music with projected stop-motion video of fruits.

The concert will conclude with Franz Schubert's Sonata in G major, D. 894. The last sonata published during the composer's lifetime, it was later described by fellow composer Robert Schumann as the "most perfect in form and conception" of any of Schubert's sonatas.

The concert takes place in Morse Recital Hall in Sprague Hall (470 College Street, New Haven). Boris Berman is the artistic director of the Horowitz Piano Series. The event will also stream live on the School of Music's website.
WATCH LIVE

Mr. Chen’s performances have been featured on radio and television stations around the globe, including KBS television and radio in Korea, NHK television in Japan, and NPR in the United States.  Solo recordings include Beethoven’s Diabelli Variations on the Bridge label, praised as “a classic” by the American Record Guide, and a recording of Joan Tower’s piano music on the Naxos label. Recordings of the Shostakovich piano sonatas and Gordon’s Orpheus and Euridice were released in 2007.

Melvin Chen completed a doctorate in chemistry from Harvard University, and also holds a double master’s degree from The Juilliard School in piano and violin. Previously, he attended Yale University, receiving a bachelor of science degree in chemistry and physics, where he also studied with Boris Berman, Paul Kantor, and Ida Kavafian. Mr. Chen was previously on the piano faculty of the Bard College Conservatory of Music, where he was also associate director. He is also the artistic director of the chamber music program at the Hotchkiss Summer Portals. In 2012 he rejoined the faculty of the Yale School of Music, where he serves as Associate Professor (Adjunct) of Piano and Deputy Dean.

"It would be hard to imagine a more musical and technically polished performance..."
— Fanfare Magazine