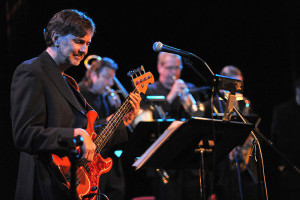 An exciting eight-piece ensemble that brings the music of Duke Ellington alive in a contemporary way, New Duke combines the power of Ellington's music with the grooves of jazz, hip-hop, and rock.

Compositions and arrangements are written by bassist and musical director Brian Torff. "You can’t re-create Duke’s incredible music," says Torff, but you can build on it in new ways, just as he always did.”

Musical mash-ups include Duke Ellington with figures such as Jimi Hendrix, James Brown, The Doors, Stevie Wonder, Pharrell Williams, and Cream. New Duke will also perform their own music steeped in blues, jazz and funk, including an original tribute to Nelson Mandela.