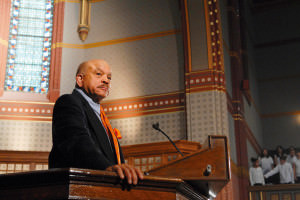 There’s something special about the art of Susan Clinard, who is quick to point out that there’s something very special about art in general — as a powerful tool for self- and world-awareness. Wood sculptor Clinard, who has created a notable body of work in her artist residency at Eli Whitney Museum and Workshop, will be one of six people and organizations honored at the annual Arts Council of Greater New Haven Awards and Luncheon Dec. 4 at the New Haven Lawn Club.[…]

The Arts Council has been host to the annual Arts Awards for three-plus decades. And speaking of long commitments, the C. Newton Schenck III Award for Lifetime Achievement (and Contributions to the Arts) will go to Willie Ruff, an accomplished and Yale-educated jazz musician who has also served the community as an educator at Yale, writer (about classical composer Paul Hindemith, who was a teacher of his at Yale, and about his experiences with jazz composers Duke Ellington and Billy Strayhorn) and ambassador (his Mitchell-Ruff Duo was the first jazz band to play in the Soviet Union and China).

Ruff, in an email this week, said, “I am honored and humbled by this appreciation of the New Haven and Yale artistic community where I have been a student, journeyman musician and educator for so long. May we continue!”