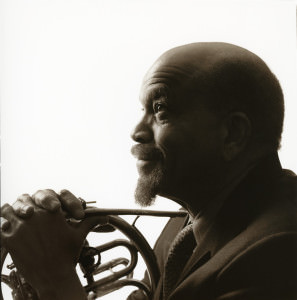 Longtime YSM faculty member and alumnus Willie Ruff '53 BM, '54 MM will be the recipient of a major award from the New Haven Arts Council: the C. Newton Schenck III Award for Lifetime Achievement in and Contribution to the Arts.

A musician and scholar of wide-ranging interests and influence, Professor Ruff has been on the faculty at the Yale School of Music since 1971, and has also served on the faculty at UCLA, Dartmouth, and Duke University. He is the founding director of the Duke Ellington Fellowship program at Yale, and his work in bringing jazz artists to Yale and New Haven public schools earned him the Governor’s Arts Award in 2000.

In an article earlier this year, the New York Times called Ruff "a kind of emissary from the jazz world for four decades" at Yale. The award announcement noted:

In addition to sharing the concert stage with some of the most iconic names in jazz, Yale School of Music professor Willie Ruff has served music and our community as an educator, an explorer, a writer, and an ambassador, inspiring audiences and connecting new generations of performers to history and possibility.

The theme of this year’s Arts Awards is Art Recharged, in recognition of the power of individuals and groups to respond to artistic and logistical challenges through reinvention.

The award will be conferred at the 2015 Arts Awards luncheon, which will take place on Friday, December 4th at the New Haven Lawn Club.