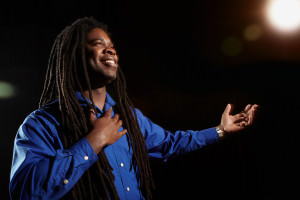 “What we have to do in every form of art is really break down the barriers in classical or operatic. In the end, it’s just music and we want everyone to be just as excited about it. I really do believe that by my going to a school and showing children or even college students what it means to be a musician — how this art form is still thriving — I believe by leading through example is the best way to get people excited about classical music,” says classical singer Dashon Burton by phone to the Banner.

The Bronx native began singing at the age of 13 in his school’s choir at the suggestion of a friend. His friend told him that the choir needed more bass. “I had no clue what he was talking about but he said that ‘it would be a lot of fun and I would get to spend some time with some friends.’ I decided to give it a go.”

By the time he was a senior in high school, Burton knew he would be singing professionally. Soon after, he began studying at Case Western Reserve University and later ended up graduating from the Oberlin Conservatory of Music in 2005. Since then, Burton has worked with numerous artists and ensembles from across the U.S. as well as across the globe, including Cameroon, Canada, Italy, and Germany.

He is a founding member of the 2013 Grammy Award-winning ensemble Roomful of Teeth. A soloist who works year round, Burton also teaches. “I go around the country and will stop into high schools or colleges. I really want to foster the next generation of people to really appreciate this music.”

In 2014, the bass-baritone singer performed for the first time with Boston Baroque in Handel’s “Messiah.” He returns for a second year on Friday and Saturday as a guest soloist with the nationally-renowned orchestra. Under the direction of Martin Pearlman, the Boston Baroque presents its 34th annual performance of Handel’s “Messiah” at The New England Conservatory of Music’s Jordan Hall.