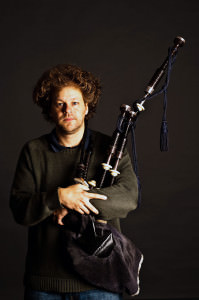 The music of Matthew Welch, who began a weeklong residency at the Stone on Tuesday, draws on a world of influences. His opening set, performed by the ensemble Cantata Profana, packed in references to Highland bagpipes, Balinese funerary rites, Minimalism, Borges, Beckett and Buddha. Yet much of the resulting chamber music is exquisitely ethereal, made up of delicate, transparent textures that hum with expressive tension. If Mr. Welch were a chef, he’d be the kind who pushes the boundaries of molecular gastronomy, transforming earthy ingredients into translucent beads of pure flavor.

Music so sparse can be difficult to pull off in a performance space like the Stone, on a corner of the Lower East Side where traffic noise, laughter and sidewalk conversations filter in from outside. It’s a testament to the skill and concentration of the musicians that the audience was spellbound.

Mr. Welch’s interests in Minimalism and rock music came through in two works, “The Secret Labyrinth of Ts’ui Pen,” in which a mixed instrumental ensemble repeats wavelike motifs that gradually grow more exuberant, and “Dhammapada Cantata,” given its premiere on Tuesday.

After the subtlety of the instrumental chamber works, this was a radical shift in energy. Coming performances of Mr. Welch’s music this week will show more of this side of his output, as well as a full gamelan and Mr. Welch himself on the bagpipes. But I found myself wishing for more of his ultra-refined, globally sourced chamber music.