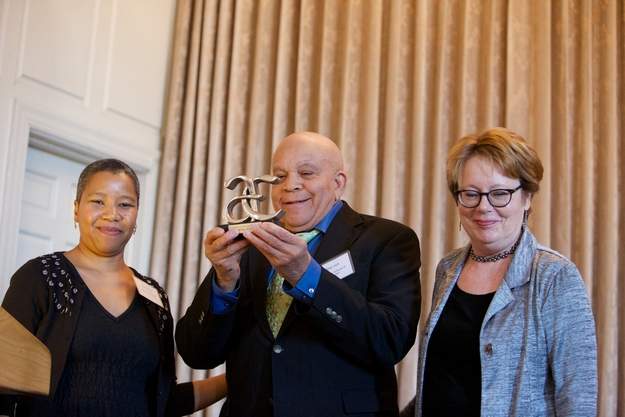 Willie Ruff, a world-renowned jazz musician and educator who has lived in Branford for more than 30 years, is a “legend in his own time,” says Cynthia Clair, the executive director of the Arts Council of Greater New Haven.

During the Arts Council’s annual awards ceremony earlier this month at the New Haven Lawn Club, where Ruff was the recipient of the C. Newton Schenck III Award for Lifetime Achievement in and Contribution to the Arts, Clair pointed out that Ruff, who attended Yale School of Music as an undergraduate after serving in the Army, performed internationally for 50 years with the late pianist Dwike Mitchell. The duo shared the stage with such jazz icons as Louis Armstrong, Count Basie, Miles Davis, Dizzy Gillespie, and Sarah Vaughan and is credited with bringing jazz to new audiences around the world, most notably in the Soviet Union in 1959 and China in 1989.

“Among the many things I find fascinating is Willie speaks seven languages,” Clair says. “And he brought the jazz greats of our time to New Haven over the past 30 years. Through the Duke Ellington Fellowship [that he established], he not only introduced them to New Haven audiences, but took them into New Haven Schools.”

Ruff also ran a jazz club in New Haven for several years, where he presented a stellar lineup of artists including a young, then-unknown singer named Aretha Franklin.

Ruff was among several people and institutions honored during the annual awards ceremony. Each year the public is invited to nominate individuals and organizations that have made a significant impact on the Greater New Haven arts community. A jury then selects five recipients to each receive an Arts Award.

The theme of this year’s event was “Art Recharged,” in honor of both individuals and organizations that “respond to artistic and logistical challenges through reinvention,” a category where Ruff excels. Born in Alabama in 1932, at 83 Ruff continues to be active as a musician, educator, and advocate.

He said he was gratified by the award.

“Thank you very much. I’m almost speechless,” Ruff joked on stage after accepting his award. “This is a great honor for me to be recognized by this community where I’ve spent most of my life. I came here as a veteran, who had become an underage Buffalo soldier. That’s where I learned the instruments and music that I would continue.

“And since I’ve come to New Haven, it’s been my great good fortune to fall under the influences of many great teachers,” he added. “They all made me the man I am today, but I forgive them.”