Yue Fei, the grand opera composed by An-Lun "Aaron" Huang ’86 MM in 1985, received its world premiere in the Tianjin Grand Theatre, China, on November 27, 2015. The work was Huang’s dissertation at Yale, and the premiere closed a thirty-year journey.

The four-act opera is based on the historical tragedy of the general Yue Fei in the Southern Song Dynasty (1127–1279). The performance, presented by the Tianjin Conservatory of Music, involved more than 300 performers. The Chinese magazine Opera featured the opera’s conductor, Maestro Xiao-Ying Zheng, on its cover; Maestro Zheng, to whom the opera is dedicated, led a concert performance of Yue Fei in 2013 and conducted the world premiere in November. Zheng is the former music director of the Central Opera House in Beijing, China.

A critic noted that “the composer’s outstanding ability to grasp the overall situation of the musical drama has made an excellent model for Chinese opera today." With the support of National Art Fund of China, there will be two more performances at Beijing's National Grand Theatre in June of 2016. 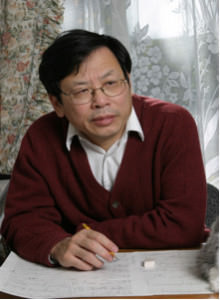 About An-Lun Huang
An-Lun Huang’s compositions have been widely performed around the world. It was with Huang's his Chinese Rhapsody No. 2 that Lang Lang won first prize in the International Tchaikovsky Youth Piano Competition in 1995. Along with his more that 40 symphonic compositions, his opera Yue Fei has been admired “as the master work of the modern Chinese opera.” His works have been chosen as the official final pieces of many music competitions, including the International Rubinstein Piano Competition in Israel. Numerous recordings and scores of his music have been published and released. More than 20 of his works have been chosen for the collections of China’s official music publishing project, “National Musical 100 Years.”

The winner of the New Pioneer Arts Award of Canada (2004), Huang is also the composer-in-residence of the Shenzhen Symphony in China. As the composer-in-residence of the Central Opera House of China, he became a member of the China Musician’s Association in 1979. He has recently been invited as a guest professor to several universities and to the Tianjin Conservatory of Music in China.

Huang studied with Martin Bresnick and Jacob Druckman at Yale. His father, the conductor Huang Fei-li, studied with Hindemith at Yale in the early 1950s.