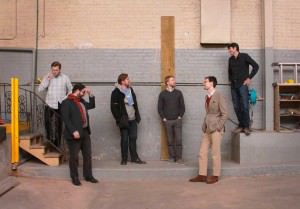 The cellist Ashley Bathgate took her bow at Le Poisson Rouge last Tuesday after the premiere of “Ash,” an evening-long work inspired by Bach’s six suites for solo cello. Then she squinted into the dimmed nightclub and made the usual hand motion of a performer beckoning the composer to share in the applause.

But Ms. Bathgate’s gesture did not just bring out a composer: It sparked a procession of dark-clothed men in their 30s who ascended the stage and lined up, smiling, behind her like a genial security detail. The men belonged to Sleeping Giant, the composers’ collective that produced “Ash” and comprises six members: Timo Andres, Christopher Cerrone, Jacob Cooper, Ted Hearne, Robert Honstein and Andrew Norman.

The men met as students at Yale University and dispersed to different corners of the country, each making an individual mark on the new-music scene. But for works like “Ash,” which Ms. Bathgate commissioned under the working title “Bach Unwound,” the composers come together, in gargantuan email chains and in Google Hangout sessions lasting hours, to collaborate on multi-movement pieces that seek to preserve their own voices within a common dramatic arc.

On Monday at Carnegie Hall, Sleeping Giant will present its most ambitious collaborative work: “Hand Eye,” written for the new-music sextet Eighth Blackbird as part of the celebrations of that ensemble’s 20th birthday. In a new-music scene that has largely given up on labels and in which different styles coexist peacefully, collaborative compositions such as this offer a chance to reflect on the common ground and the individual differences among some of the fastest rising stars. For the composers, it injects a social, and argumentative, element into what is otherwise a solitary pursuit.

Composers’ collectives have always had a certain combative spirit. But it is perhaps a sign of the fuzzy warmth of the current all-embracing new-music scene, where no one style is dominant, that composers seem to band together in order to argue with one another, rather than take up the fight against a perceived status quo.

The Bang on a Can collective, formed in the 1980s by the composers Julia Wolfe, Michael Gordon and David Lang, locked horns with an American new-music scene that was still largely dominated by European Modernism. “There was more to fight against,” Ms. Wolfe said of those early years, in a phone interview. “We bumped into a lot of walls. That’s very different to today. There isn’t a similar kind of conflict.” She said that her group tried to open doors to a greater plurality of styles in its concerts and music marathons, and was surprised when Bang on a Can came to be identified with a particular aesthetic (open to pop influences, fond of amplification).

Sleeping Giant, too, may be heading for that sort of cohesion. On Tuesday, the individual movements of “Ash” rang clear with the distinct voices of its composers. These included Mr. Norman’s dry wit in “For Ashley,” the dreamy tranquillity of Mr. Honstein’s “Orison” and the hyperactive virtuosity of Mr. Andres’ “Small Wonder.”

For “Hand Eye,” the work that Eighth Blackbird will present at Carnegie Hall, the composers worked references to one other’s music into their respective movements. Mr. Cooper’s and Mr. Hearne’s will interlock, subtly.

“People like commissioning us,” Mr. Cooper said. “It’s a good way of ensuring that you’ll have a cohesive piece.”