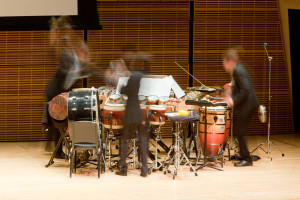 The Yale School of Music presents a concert by the Yale Percussion Group on Sunday, February 14 at 7:30 pm. The program will feature the premiere of James Wood's trio Sea Dances alongside works by Ligeti and Xenakis.

Directed by Robert van Sice, the YPG has been called "something truly extraordinary" by composer Steve Reich and the ensemble has won the Percussive Arts Society Competition in both 2009 and 2014.

Sea Dances, by James Wood, is the product of a long fascination with the sea. Years before its conception Wood collected numerous recordings of the sea in various conditions, from lapping waves to rough surf. He then analyzed those recordings for their qualities of rhythm and movement. "The resulting data," he writes, "went on to form the basis for the rhythmic, dynamic, and spatial structure of the work." 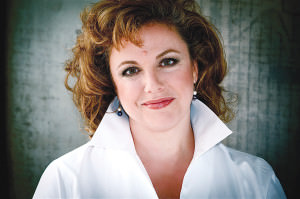 Soprano Janna Baty, a member of the Yale faculty, will join the YPG for György Ligeti's Síppal, dobbal, nádihegedüvel ("With pipe, drum, fiddle"). The song cycle sets a whimsical, often nonsensical text by Sándor Weöres against an unusual ensemble of percussion and wind instruments, including slide whistles, recorders, and harmonica.

The YPG will also perform Iannis Xenakis's famous sextet Pléïades. Named for the Pleiades star cluster, the work is written in four movements, each highlighting a percussive instrument grouping—metal, skin, mallets—and a mix of all three. The work also includes an instrument called sixxen, which Xenakis had constructed specifically for the composition. The sixxen (named for the six musicians needed for the work and Xen after his own name) consists of 19 metal bars tuned microtonally and played with metal hammers.

About the Yale Percussion Group 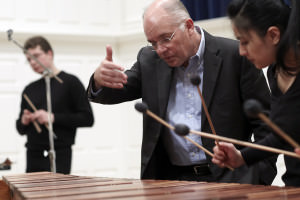 Founded in 1997 by Robert van Sice, the Yale Percussion Group has been called “something truly extraordinary” by composer Steve Reich. It is composed of talented and dedicated young artists who have come from around the world for graduate study at the Yale School of Music.

In recent seasons, the YPG has performed in Zankel Hall at Carnegie Hall, Galapagos Art Space, and the Kennedy Center. The ensemble won the Percussive Arts Society competition in 2009 and 2014. A concert in 2012 called “75/100″ celebrated the birthdays of Steve Reich and John Cage. The Zankel Hall concert was part of the Yale in New York concert series;

Members of the YPG have gone on to form groups such as the acclaimed quartet So Percussion and the new ensemble Sandbox. YPG alumni have also performed with ensembles such as Lincoln Center’s Chamber Music Two, the Carnegie Hall Academy Ensemble, the Oslo Philharmonic, and the Orpheus Chamber Orchestra.