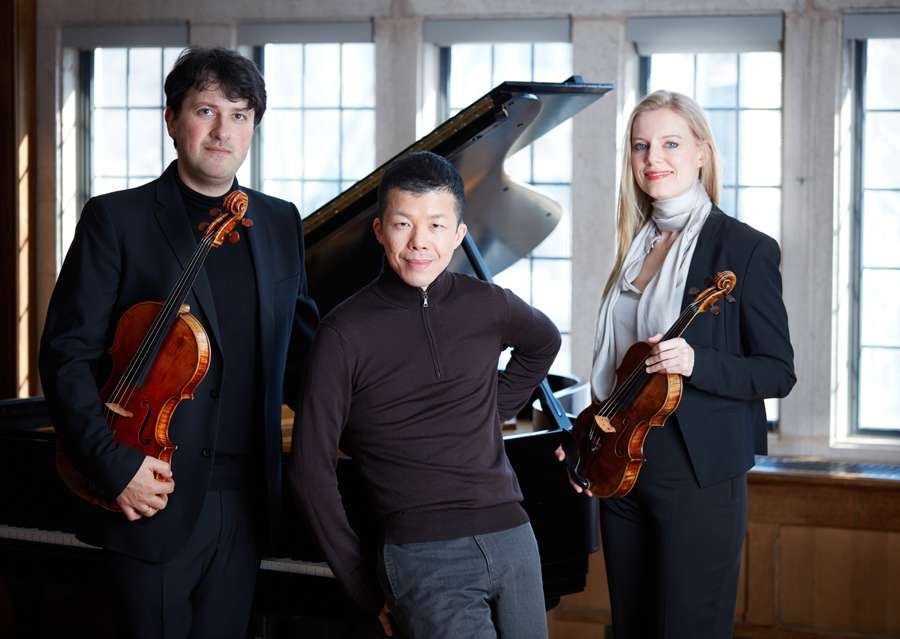 The Yale School of Music’s Faculty Artist Series presents a recital featuring violist Ettore Causa and pianist Wei-Yi Yang, along with guest violinist Julie Eskar, on Friday, February 12 at 7:30 pm. The concert will include music by Mendelssohn, Nielsen, Penderecki, Fauré, and Bruch.

The program opens with two sonatas: Felix Mendelssohn's Sonata for Viola and Piano in C minor, MWV Q14, and Carl Nielsen's Sonata for Violin and Piano No. 2, Op. 35. The two string players will team up for Krzysztof Penderecki's Ciaccone for Violin and Viola. Causa will perform his own arrangement of Gabriel Fauré's Elegie, Op. 24, originally written for cello and orchestra. All three musicians will come together to close the concert with four selections from Max Bruch's Pieces for Violin, Viola, and Piano, Op. 83.

The concert takes place in Morse Recital Hall, located in Sprague Hall at 470 College Street. Admission to the performance is free, and the concert will also stream live online. For more information, call the Yale School of Music concert office at 203 432-4158.

About the Performers
Violist Ettore Causa is praised for his exceptional artistry, passionate intelligence, and complete musicianship. He has performed at festivals such as the Menuhin (Gstaad), Salzburg, Tivoli (Copenhagen), Prussia Cove (England), Savonlinna (Finland), Launadire (Canada), and Norfolk (Conn.) Festivals. Mr. Causa is a former member of the Aria Quartet and a current member of the Poseidon Quartet, and has collaborated with such renowned musicians as the Tokyo, Artis, and Elias String Quartets, Pascal Rogé, Boris Berman, Peter Frankl, Thomas Adès, Natalie Clein, Ana Chumachenco, Ani Kavafian, Alberto and Antonio Lysy, Liviu Prunaru, Thomas Demenga, Anthony Marwood, Ulf Wallin, William Bennett, and others. Mr. Causa studied at the International Menuhin Music Academy with Alberto Lysy and Johannes Eskar, and later at the Manhattan School of Music with Michael Tree. After teach- ing for many years at the International Menuhin Music Academy, Mr. Causa joined the faculty of the Yale School of Music in 2009. His recordings include two Claves CDs:  one of the Brahms viola sonata and the other his tran- scription of Romantic pieces, which was awarded 5 Diapasons. Mr. Causa performs on a viola made for him by Frederic Chaudière in 2003.

Pianist Wei-Yi Yang has earned worldwide acclaim for his captivating performances and imaginative programming. Most recently, he was praised by the New York Times as the soloist in a "sensational" performance of Messiaen's Turangalîla-Symphonie at Carnegie Hall. Gold Medal winner of the San Antonio International Piano Competition, Mr. Yang has also performed at Lincoln Center, the Kennedy Center, and across Europe, Australia, and Asia. A dynamic chamber musician with a diverse repertoire, Mr. Yang has collaborated with the Pacifica, Cassatt, and Tokyo String Quartets; as well as Frederica von Stade, Clive Greensmith, and Richard Stoltzman, among numerous others. Mr. Yang has curated inventive interdisciplinary projects, including a collaboration with actress Miriam Margolyes as part of the “Dickens' Women” world tour; lecture-recitals on the confluence of Czech music and literature; and multimedia performances of Granados' Goyescas with projections of Goya’s etchings.  Mr. Yang studied first in the United Kingdom and then with Arkady Aronov in New York. Under the guidance of Boris Berman, he received his D.M.A. from Yale in 2004. Mr. Yang regularly appears at festivals across the United States, from Norfolk to Napa Valley, and abroad, including Germany, Serbia, Montenegro, Mexico, and Scotland. In 2005 he joined the faculty of the Yale School of Music.

Julie Eskar is currently the concertmaster of the Danish National Chamber Orchestra and has performed as a soloist with several orchestras in Denmark and abroad. An avid chamber musician, Ms. Eskar has played in major festivals around the world, such as Prussia Cove (England), Horten (Norway), Incontri in Terra di Siena, BIMF (Italy), Tivoli (Denmark), Norfolk, etc. performing aside musicians such as Boris Berman, Jeremy Denk, Clive Greensmith, Thomas Demenga, Ralph Kirsbaum, Michael Kannen, Antonio Lysy, Alberto Lysy, Vilde Frang, Ani Kavafian, and Ettore Causa, among others. Julie is a founding member of the Eskar Trio, an international award-winning ensemble that has established a reputation as one of the leading ensembles on the Danish chamber music stage and has also enjoyed great success in Europe and Japan. The Trio has released several critically acclaimed recordings; its second CD, featuring never-before recorded Danish Romantic piano trios, was awarded Best Chamber Music Recording and Best Classical Recording of the Year by the Danish Radio Music Awards. Ms. Eskar studied under Professor Milan Vitek at the Danish Royal Academy of Music in Copenhagen and with Professor Gerhard Schultz at the University of Music and Performing Arts, Vienna. She has also worked under the guidance of Alberto Lysy, Ana Chumachenco, Christian Tetzlaff, and Ivry Gitlis.