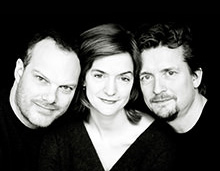 The Oneppo Chamber Music Series at the Yale School of Music presents the Tetzlaff Trio on Tuesday, February 23 at 7:30 pm.

They will perform music by two prolific 19th-century composers: Johannes Brahms and Antonín Dvořák. Opening and closing the program are two trios by Brahms: the Trio No. 2 in C major, Op. 87, and the Trio No. 1 in B major, Op. 8, respectively. The ensemble earned a Grammy nomination for their recent recording of the complete Brahms piano trios, and Strings Magazine raved that the ensemble makes the trios "fresh and immediate again… These lovely recordings capture the heart of the composer’s deeply personal, intimate expressions… consistently illuminating." Watch the ensemble play Brahms' Trio No. 1 here.

Also featured on the program is Dvořák's Piano Trio in E minor, Op. 90, "Dumky." The subtitle Dumky (plural of Dumka) refers to a type of Slavic folk song characterized by its melancholy mood and abrupt changes in tempo. Dvořák used a wealth of Czech folk inspiration in his writing, incorporating the Dumka style into many works.

Christian Tetzlaff is widely considered as one of the world's leading violinists, and maintains an extensive performing schedule. He held the position of Artist in Residence for the Berlin Philharmonic for the 2014–2015 season, has performed with the world's foremost orchestras and conductors, and was named Musical America's "Instrumentalist of the Year" in 2005.

Tanja Tetzlaff has developed a diverse career which includes solo and chamber performance. She has successfully participated in many international competitions, and has performed to critical acclaim with world-renowned orchestras and conductors. A dedicated chamber musician, Tetzlaff performs regularly in international chamber festivals with some of the world's leading musicians.

Pianist Lars Vogt was appointed the first ever Pianist in Residence by the Berlin Philharmonic in 2003–2004 and enjoys a high profile career as a soloist and chamber musician. Vogt is now increasingly working with orchestras both as conductor and directing from the keyboard and was recently appointed Music Director of the Royal Northern Sinfonia at the Sage for the 2015–2016 season.

"In the modern concert world, such a trio is a rare treasure." — Los Angeles Times